The Titfield Thunderbolt (1953), starring legends of British screen Stanley Holloway, Hugh Griffith and Sid James, is one of those rare things seldom found in cinema – a film which is virtually perfect in every respect. Made by the iconic Ealing Studios and directed by Charles Crichton (who’d been responsible for the studio’s previous hits Dead of Night [1945] and 1951’s The Lavender Hill Mob), this story of a group of villagers who fight to save their local railway line when it’s threatened with closure, is as fresh now as when it was released sixty years ago – which makes this new StudioCanal rerelease all the more enjoyable and satisfying.

To the distress of the community who depend on it to get to work, the rural train link between Titfield and Mallingford is to be closed by the government-run British Railway Service. In desperation, a group of train enthusiasts led by local vicar Weech (George Relph) and his friend Gordon (John Gregson) decide to take matters into their own hands. With the backing of the wealthy Walter Valentine (Holloway), who agrees to help on the condition they install a bar with extended opening hours in the passenger car, they take on the might of the powers of Whitehall – as well as the fiendish plots of a local bus service – with predictably hilarious results. 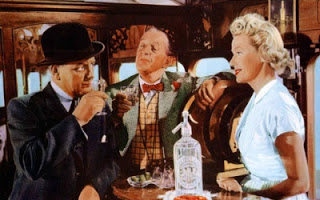 Everything about The Titfield Thunderbolt sparkles with joyous vigour. Shot in startling Technicolor and digitally restored by Pinewood Studios to celebrate its 60th anniversary, the Thunderbolt and the bucolic countryside through which it steams spring from the screen with a new vitality. However, even more than that, it’s the film’s evocation of a long lost Britain which will likely appear most startling to modern audiences. In the current climate, when the quality of train services is a hot topic amongst commuters, the rerelease of this story about of a group of people who take the government on at their own game seems timely.

Watching it back now, the film’s recreation of a country village where everyone knew their neighbours and were willing to pull together for the good of the community, may seem quaint. However, seeing the cast of British eccentrics – including the instantly recognisable Godfrey Tearle (or Sir Godfrey Seymour Tearle to give him his proper title) as a wonderfully enthusiastic train-mad bishop – you cannot help but be touched as they pull out all the stops in a bid to save their beloved branch line.

With a host of extras including a location’s featurette, home movie footage by cinematographer Douglas Slocombe and original trailer, The Titfield Thunderbolt is a wonderful testament to an age where everything, including the railways, ran just that little bit smoother.

Win a DVD copy of StudioCanal’s rereleased The Titfield Thunderbolt with our latest competition. Follow this link to enter.