Due in no small part to the delayed UK theatrical release of Hadewijch (2009), Hors Satan (Outside Satan, 2011) is the second Bruno Dumont film to hit these shores within the last twelve months – no bad thing, of course. Whilst nowhere near as famous as his numerous awards would suggest, Dumont remains one of Europe’s most divisive and challenging directors, with Hors Satan a prime example of his provocative, yet taxing minimal style. Hors Satan focuses on an unnamed, intimidatingly silent reprobate (David Dewaele) who Dumont’s elegantly lilting camera quietly stalks through the isolated countryside of a Northern French province.

Said province is situated on the verge of the English Channel – a fitting setting for a film that teeters so precariously on the edge of ethical decency. This wayward and seemingly incongruous individual lives off handouts and sleeps rough, observing the local community and dishing out brutal retribution for their wrong doings. There is seemingly little method to the violence that Hors Satan’s central character employs, other than an inherent belief that he knows who has earned salvation and who deserves to feel the sharp searing pain of this devilish manifestation’s scythe – albeit a double-barrelled, twelve gauge scythe of reckoning. 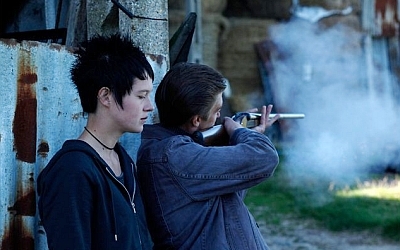 Hors Satan boasts a sumptuous collection of broad landscapes shot in wide angle that majestically capture the magnificence of nature and dilute the cold harsh world to its organic bones. Shot by Dumont’s regular DoP Yves Cape (who made Claire Denis’ White Material (2009) such a vivid nightmare of repression and rebellion), this sophisticated canvas of earthy, natural greens and muted, sunsets that burn like dying embers in a deserted camp fire adds a welcoming dynamism and elegance to an otherwise opaque and languorous tale. Dumont’s latest serves as a gentle reminder of the forgotten simplicity that lies behind the manufactured despondency which accompany modern life.

Ostensibly a meditative examination of the battle between good and evil, Dumont uses the silent chemistry of his actors to present the audience with the blurred grey area which separates these polar extremes of morality, with this internal anguish represented in human form by David Dewaele (previously seen in Dumont’s religious parable Hadewijch). This leisurely piece of acutely philosophical, existential cinema is reminiscent of the works of Tarkovsky, Bergman and Bresson, with Dumont yet again proving himself to be one of the great contemporary auteurs. His reliance is on core human themes and ancient spiritual quandaries instead of transparent action and overly explanatory dialogue to create a thoughtful example of shrewd and thought provoking cinema.

Pretentious and almost impenetrably abstract, Dumont’s latest remains an exquisitely hypnotic and transcendental allegory for the complex moral conflicts that consumes us all. Behind this deliberately unhurried, almost silent excursion through the rural plains of Northern France lies a cacophony of profound imagery and stimulating ideas, that plays out in a devastatingly theoretical manner. Hors Satan is certainly not one for everybody, but if you like your films challenging and conceptual, Dumont never fails to deliver.