Roger Michell’s Hyde Park on Hudson (2012) tells the tale of a clandestine love affair between Franklin D. Roosevelt and his distant cousin, Daisy. A whimsical comedy about the importance of ‘special relationships’, Michell’s period farce stars an eclectic mix of US and UK talent including Bill Murray, Laura Linney, Olivia Williams and Olivia Colman. On the cusp of the Second World War, King George VI (Samuel West) and Queen Elizabeth (Colman) are about to embark on a weekend trip to the hospitable homestead of philandering president Franklin D.Roosevelt (Murray) – his mother’s luxuriant rural retreat outside the titular US town of Hyde Park.

Through the diary entries of Roosevelt’s cousin and summer fling Daisy (Linney), Michell takes us behind the scenes of this democratic stronghold of 1940s America, indulging in period charm, cocktail confessions and a strange fascination with regal hot dog consumption. This surprisingly raunchy period drama-cum-jocular comedy charade does, however, paint a rather irregular portrait of the presidential household prior to the outbreak of the world’s most destructive war. Murray’s representation of Roosevelt as a hip flask-wielding, promiscuous jester with a wandering eye for the ladies is only outdone by the clichéd pompous eccentricities of the British royal family. 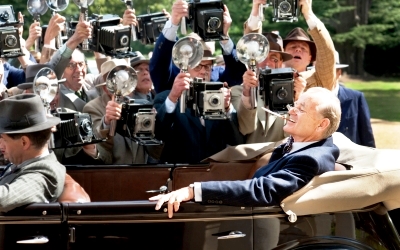 This saucy comedy about diplomatic relations ultimately turns into Carry On Down the Hudson, relying on fanciful farce, fatuous witticisms and amorous fumblings rather than intelligent storytelling. Tonally misfiring at almost every turn, Hyde Park on Hudson’s odd fascination with hot dogs and scorning etiquette does boast some lush aesthetics, with a bountiful supply of majestic rolling scenery and some sumptuous set designs. However, this attractive backdrop only illuminates the film’s numerous failings, most notably Michell’s patronising play on prudish British sensibilities – which would have been far more tolerable if the film wasn’t so keen to riff on hit exports The King’s Speech (2010) and Downtown Abbey.

However, the film’s inability to fashion any resemblance of durable character foundations is perhaps it’s most noticeable flaw, relying too heavily on stereotypes and a lacklustre narration to relay its message. The acting is all of a fairly admirable standard (especially Murray and Colman) however, reciting the film’s narrative through Daisy, a flimsy protagonist whose character is far too flat and lifeless to make for an endearing narrator, ultimately results in a historical period romp that lacks any genuine zest or vivacity.

Presenting two parallel narratives about the importance of love and fraternity, Hyde Park on Hudson does a remarkable job of taking neither narrative strands particularly seriously, leaving any semblance of entertainment in a comatose state whilst your curiosity is left to morn this neglected virtuosity. Michell’s curiously facetious approach culminates in a monotonous collection of limp amateur dramatics set against an opulent backdrop, resulting in a film stuck in a constant state of tedious, unwavering inertia.