Finnish filmmakers Jukka Kärkkäinen and Jani-Petteri Passi scored a surprise hit on the festival circuit last year with their 2012 music documentary, The Punk Syndrome. The film chronicles the trials and tribulations of Pertti Kurikka’s Name Day, four punk musicians with learning difficulties, as the band do their first recording session, tour Europe and return to Finland as national heroes. Fronted by the eponymous and instantly likeable Kurikka, the band’s simple but emotionally raw lyrics and rough punk sensibility are a form of empowerment and a statement of angry protest against the discrimination they have each faced.

The Punk Syndrome is an honest and funny portrait of the four members of the band, and one which shows the every day realities for those with learning difficulties and the frustrations of living in shared residential homes. Scenes of in-fighting and rivalry during rehearsals and on tour reveal Pertti Kurikka’s Name Day to be similar to any other emerging band – complete with the requisite large egos and heady dreams of success. 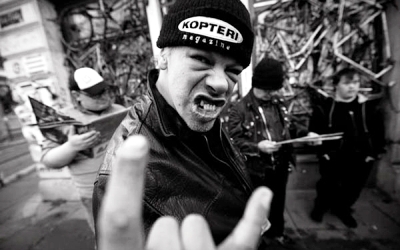 Yet there are also moments that are as deeply and painfully personal as a home movie, such as the quiet heartbreak of Toni’s unrequited love, or the genuine affection shown as Kari wordlessly comforts Sami after the latter undergoes a humiliating defeat at a local strong man competition. It’s an affecting but reassuringly non-sentimental approach from Kärkkäinen and Passi, and you can’t help but be drawn in by the band’s frank discussions about love, music, death, sex and friendship.

Amidst the fallouts there is a warmth and solidarity, as well as a shared passion for punk music and live performance. Off-stage, the foursome sometimes appear awkward; the tearful Pertti, in particular, seems in need of support by their always calm manager and friend Kalle, exposing an unsettling vulnerability as he openly talks about his childhood in an orphanage. On-stage, however, the band truly thrive. Through their intensity and fierce, growled vocals, they command the respect they deserve from their audience.

The Punk Syndrome is a compelling and often brutally direct documentary that confronts attitudes towards mental disability through an inspiring group of punk rockers. Those who are charmed by the band will be pleased to know that the release of Kärkkäinen and Passi’s film has been timed to coincide with Pertti Kurikka’s Name Day’s official tour, so there are plenty of upcoming opportunities to experience live their own unique brand of anarchy in the UK.