David Gordon Green makes an underwhelming return to his indie roots with this tiresome remake of Icelandic comedy-drama Either Way (Á annan Veg, 2011), re-titled Prince Avalanche (2013) and starring Paul Rudd and Emile Hirsch. Alvin (Rudd) and Lance (Hirsch) spend the summer of 1988 remarking the seemingly endless roads that run through a forest burnt down in the disastrous Texas wildfires of the previous year. The pair could, predictably, not be more different. Alvin relishes in this newfound isolation, spending his spare time hunting, fishing and displaying his soft side with atrociously-written poetic letters to his girlfriend.

Lance (Hirsch), on the other hand, longs for the weekend where he can party, find a girl and let off some steam. The pair meander along the Texan roads, encountering a strange truck-driving drunk (Lance LeGault) and a nameless woman (Joyce Payne) whose home has been devastated by the fires, whilst bickering, arguing and eventually making up. Laconic in tone, this washed-out English language remake of Either Way opens boldly, with crackling images of the hellish fires that devastated the region, but runs out of fuel rather too quickly to be enjoyable. 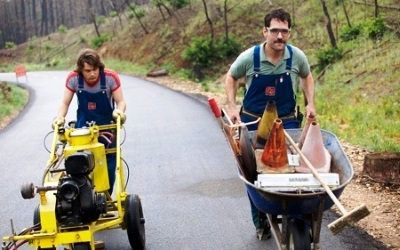 The juxtaposition of the two central characters is the bedrock of the comedy, with each party making vain efforts to tolerate each other’s idiosyncrasies. At times, this hits the mark providing a few titters here and there – at others, it just feels like more of the same shtick Rudd has based his entire comic career upon. More-so than the lukewarm performances, one of Prince Avalanche’s central problems comes from the contrast of David Wingo’s ethereal, overly weighty score, which seems to attempt to elevate the bromance humour to a more profound level. This is further compounded – if not encapsulated perfectly – by the beautifully captured, but thematically jarring opening shots of charred, decaying flora and fauna.

The concept of focusing on the scarred ecology and near-apocalyptic damage done by Texas’ wildfires does give rise to the most potent scene of the film, wherein Payne’s wandering survivor desperately searches in the smouldering remains of her burnt house for her pilot’s license. Alvin converses with her, then begins to act out an imagined drama of returning home to his lover, kindling sympathy with the man who – despite enjoying his solitude – appears desperately alone. As the pair learn to put aside their differences and the humour abates, there is tenderness to their oddball relationship, but it fails shine through often enough for satisfaction’s sake.

Prince Avalanche’s tonal choices fall to mesh with the action on-screen more often than not, leaving you with a sense that this return by Gordon Green to his cinematic origins may well be eternally hindered by the bad habits he picked up making dire messes of movies such as Your Highness (2011) and The Sitter (2011).