Denis Côté’s Vic + Flo Saw a Bear ( Vic et Flo ont vu un ours, 2013) is the follow-up to the experimental French Canadian director’s zoo doc, Bestiaire (2012). A detached and ultimately soulless portrayal of the rehabilitating limbo of post-prison reintegration, Côté’s offbeat and darkly comic drama is a near-impenetrable enigma of a film. We meet Vic (Pierrette Robitaille) as she arrives at an isolated bus stop, where she encounters two young boys, one of whom plays her an off-tune rendition of Farrah Shamek on his shabby-looking trumpet. She refuses to pay him anything for his rotten performance, yet the boys can’t quite understand why.

This droll and irksome opening (briefly bringing to mind the quirky sensibilities of Wes Anderson’s cinema, shot through the gloomy and disconnected palette of a high-brow horror) promises a delightfully dark, yet refreshingly peculiar film, full of sharp humour and curious set pieces. Sadly, however, this brief elliptical exposition is just one of the film’s limited agreeable scenes. Vic is, in fact, a 60-year-old ex-con returning from prison after serving a life sentence for a crime that, like most of the film’s character’s motivations, is never disclosed. 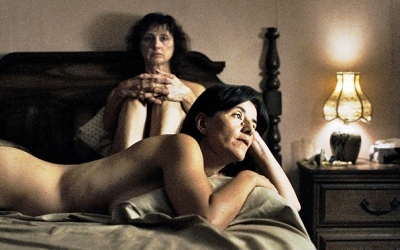 Vic’s here to stay in her catatonic uncle’s dilapidated ‘sugar-shack’ – an isolated rural idyll she inhabits with her former cell mate and lover Flo (Romane Bohringer). At first, this repugnant pair seem quite content within this quaint country retreat. However, constant intrusive visits from Vic’s parole officer, Flo’s unstoppable promiscuity and the arrival of a suspiciously gregarious ‘council worker’ all help turn this secluded hideaway into a grim purgatory. This impermeable collection of excessively eccentric characters and forced artificial ambiance is made all the more unbearable due to what feels like a heavily improvised script of banal dialogue and innocuous, surrealist events.

Like an opaque Coen brothers thriller – minus the charisma and character development – Vic + Flo Saw a Bear imbues itself with hints of physical horror. Yet, due to the film’s obnoxious collection of repugnant characters, these simply evoke a sense of guilty pleasure at witnessing their suffering, rather than genuine shock or disgust at this startlingly grotesque violence. This incredibly disengaging film’s failed attempts at cinematic subterfuge culminate in an idiosyncratic and jarringly clinical comedy-horror – that quickly becomes an impervious nightmare of a film that you fear you may never wake from.

Whilst commendable for its attempts to traverse the usual trappings of formulaic filmmaking, in doing so Côté has neglected to authenticate the emotional background required to involve the audience in his protagonists’ plight. Vic and Flo Saw a Bear is a tragically monotonous, stultifying film that, whilst high on style and alluring peculiarities, is dangerously low in narrative substance and the necessary sentiment required to effectively carry across its eccentric approach.