When Graham Chapman joined the choir invisible in 1989, it put an end to rumours of a full Monty Python reunion once and for all. The majority of the gang have been brought back together though, in voice at least, for an animated chronicle of the life of the inimitable comedian. In 1980 Chapman wrote his fictionalised memoirs, which involved little factual fidelity, and more concern with the kind of flights of fancy for which he and his colleagues were famous. A Liar’s Autobiography: The Untrue Story of Monty Python’s Graham Chapman (2012) is a film adaptation of that book directed by Bill Jones, Jeff Simpson and Ben Timlett.

A haphazard affair, it employs a plethora of animation styles to create an enormously, and deliberately, unreliable account. Vaguely charting his life, it begins with a dull and lonely childhood in Leicester, his nose forever in a book and his parents forever wishing it wasn’t. After arriving in Cambridge to study medicine, he joined the Footlights and met a certain John Cleese. This then propelled him into the world of surreal comedy and through apposite means the audience is whirled through a cursory, and fragmentary, look at an existence overflowing with with alcohol but with import for being one of the first celebrities to openly come out as gay. 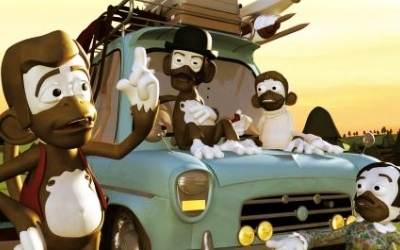 Having employed over a dozen varying animation studios using wildly different techniques to contribute their expertise to the chaotic ensemble, the trio of directors here attempt to stitch everything into a coherent whole. With source material purportedly compiled by five different authors (‘too many cooks’ and all that), and sections that came from reworking unused sketches , it is – unsurprisingly – erratic. With so much thrown into A Liar’s Autobiography, some was undoubtedly going to stick and there are some fantastic and fascinating moments. The narration, by Chapman himself from beyond the grave (he recorded an audio version of the book before he passed on), is the closest we come to real man.

Rather than insight, you are treated to darkly absurd skits such as a bloody recreation of the famous fight between Colin ‘Bomber’ Harris and Colin ‘Bomber’ Harris. Some of these can be quite effectively disturbing but they are only ever vignettes and most have passed before they’ve had a chance to really register. The biggest omission from the film (besides Eric Idle) is that it lacks any real humour. There is the odd moment – John Cleese’s eulogy for Chapman for instance – but it is largely a more serious affair, though flippantly surreal.

Ultimately, whilst A Liar’s Autobiography might just be enough to Monty Python fans desperate for a fix, it largely inspires a desire to see more incisive and engaged documentary about the man, or something that fittingly celebrates his comic talents. Sadly, this doesn’t really do either.