It’s always a somewhat curative thing to see Tim Burton return to the roots of his filmmaking career. Graduating from CalArts amongst a generation of animators who would push on to spearhead ventures such as Lucasfilm and Pixar, he first came up with the idea for 2012’s Frankenweenie all the way back in 1984. Then, it was a short live-action piece, as there weren’t any feature-length, computer-animated films (Toy Story was the first in 1995), and Burton was abruptly fired from Disney for creating a film that was deemed too scary for children. Thankfully, after almost 30 years, he finally got to finish what he had started.

Frankenweenie (2012) is in part a parody of Universal’s 1931 film version of Mary Shelley’s horror story but also a refreshed 21st century pledge to the power, resourcefulness and utility of science. And where better to start than with a school project? Incoming ex-soviet teacher Mr. Rzykruski (Martin Landau) – a looming Vincent Price lookalike – inspires Victor Frankenstein (Charlie Tahan) to bring his beloved dog Sparky back to life. But in a town full of mischief and rivalry, hunchbacked schoolmate Edgar ‘E’ Gore (Atticus Shaffer) spreads word of Sparky’s revival, causing panic and mayhem on the streets of New Holland. 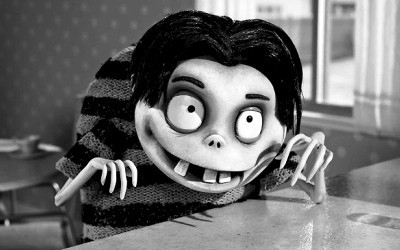 The animation is itself a Frankensteinian creation, an apprised stitching together of characters who recall the spindly figures in the films of Henry Selick. Inspirations from James and the Giant Peach (1996) and Coraline (2009) to the unmistakably Gothic flavours in Burton’s own The Nightmare Before Christmas (1993) and Corpse Bride (2005) coalesce in this rich and enterprising retelling of Shelley’s original. It’s simplified by Burton however, avoiding the titan discourse in the original and in its place unravelling the relationship between a boy and his pet. There’s even a strong sense that Burton is having fun, with countless references to the 19th century text and horror sub-genres.

Just as Burton was restricted by technology in 1984, he is empowered by it here. Digital advances have allowed him to explore Frankenweenie at full stretch; it is an early idea which Burton has reanimated. There is a gorgeous paradox to be found: the director has taken a dark (and once terrifying) story and turned it into a warmhearted romance, lovingly designed and redrawn by virtue of his connection with the story. He has even kept the original black-and-white format he used in 1984.

As a result, there is no colossal adventure or leap forward in animation; instead a gentler sense of achievement which almost defines Burton’s career. Frankenweenie is a symbol of Burton’s love for literature, but also a statement of his commitment to previous projects, one which sees him underline the significance of animation to his auteurism.