With Alfred Hitchcock arguably the toast of 2012, celebrated with a year-long season at the BFI and his classic 1958 film Vertigo topping the Sight & Sound ‘Greatest Films of All Time’ poll, Sacha Gervasi attempts to prolong the celebration of the ‘Master of Suspense’ with his all-too-comfy biopic Hitchcock (2012), starring Anthony Hopkins in the title role. Opening as would an episode of Hitchcock Presents, we find the stout and portly director outside the lonely house where Ed Gein would commit the murders that became the inspiration for 1960’s Psycho. We then cut to Hitch after the premiere of North By Northwest (1959), to find the 60-year-old director in a rut.

Frustrated by his lack of work and in a mad scramble for inspiration, Hitch discovers American writer Robert Bloch’s Psycho novel and realises this is the film he has been waiting to make. As the production begins, we see Hitchcock’s life plagued by obsessions with his leading ladies (including Scarlett Johansson’s Janet Leigh), battles with the studios and censors, and above all, how this all wears upon his marriage to Alma Reville (Helen Mirren). Hopkins is nearly unrecognisable as the titular director, hidden beneath some rather clumsy prosthetic make-up (caked on in an attempt to capture the loose hanging jowls and double chin). Sadly, Hopkins only ever achieves impersonation rather than personification, as he wolfs down pots of foie gras and necks bottles of expensive champagne. 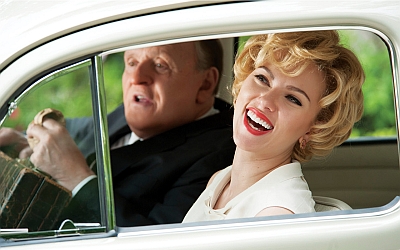 John J. McLaughlin’s screenplay (adapted from a book by Stephen Rebello), includes far too much IMDb-style trivia, forming a tick-box structure that illustrates research but forgets to entertain. There are loose attempts at comedy – we even have his infamous introduction “Call me Hitch, hold the cock.” However, whilst all of these biographical details are accurate, it’s the timing and placement that hinders its delivery. More criminally, we’re also presented with tonally odd scenes in which Hitch hallucinates about Gein, like a devil on his shoulder. This attempt at doubling is handled poorly, projecting the guilt Hitch feels about his voyeuristic tendencies, but removing much of the conflict and complexity of the man himself.

The plot trundles along in a homely way, in a manner not dissimilar to Simon Curtis’ My Week with Marilyn (2011), but never generates anything truly remarkable. Of the cast, Mirren arguably walks the walk best, giving an assured and emotional performance as a woman masked by her husband’s ever-looming shadow. The story heads further into occasionally interesting territory when it briefly explores Anthony Perkin’s’ (James D’Arcy) homosexuality, but this is hastily dropped for a more mainstream route. Jessica Biel’s Vera Miles and Johansson’s Janet Leigh aren’t really given the necessary room to become characters we care about, and it would be fair to say that the majority of characters provide only tantalising glimpses at what they could have been in better hands.

It would be unreasonable to expect any director or production team to fully realise and capture an individual as iconic and intriguing to cinéastes as Alfred Hitchcock within a tight, 90 minute runtime. Sadly, for the most part, with Gervasi’s effort we aren’t even regularly entertained. The star cast will undoubtedly draw people (and award voters) in, as will the subject matter. Yet Hitchcock remains a disappointing affair, remarkable only because it has achieved the near impossible – it makes the ‘Master of Suspense’ seem tragically dull.

Sacha Gervasi’s Hitchcock is released in UK cinemas on 8 February, 2013.