The latest film from Japanese director Hirokazu Kore-eda, I Wish (Kiseki, 2011) is a near-perfect, heartfelt rendition of two boys’ formative childhood years, with a pinch of magical realism thrown in for good measure. Featuring some of the finest child performances you’ll see all year, Kore-eda casts real-life siblings Koki and Oshiro Maeda as sweet-natured brothers Koichi and Ryunosuke, separated by their young parents’ recent separation. Divided between the two opposing towns of Kagoshima and Hakata, the two boys forge a plot to bring their mother and father back together by utilising the perceived mystical powers of the Japanese bullet train.

Residing with his workaholic mother and kindly grandparents under the shadow of a still active volcano, Koichi spends his days ascending/descending the steep hill that leads to his school, gazing lovingly at the attractive librarian with his friends and enjoying a swim at the local pool. Youngest of the two Ryunosuke, on the other hand, leads a far more pastoral existence with his rock-musician dad, tending to a growing vegetable patch each and every morning before himself attending class. Though now leading distinctly different lives, the boys retain their special connection (aided, of course, by their mobile phones), and hatch a plan to harness the miraculous power created when two speeding trains cross paths in order to fulfil their dreams of being reunited. 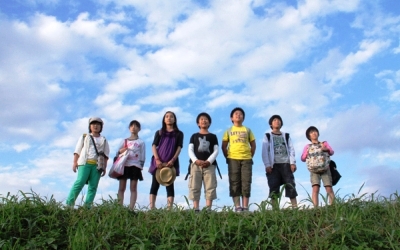 With such a fantastic central premise in place, Kore-eda sets about expertly capturing the essence of what it is to be a child with aspirations – realistically, at least – beyond their own small influence. With the welcome help of the prodigious Maeda brother (comedians by trade, remarkably enough), I Wish works supremely as a moving modern fairytale, set amidst the rolling green hills and crocodiling school lines of contemporary Japan. Thankfully absent are the over-blown dramatics and ripe sentimentality that tend to plague the coming-of-age sub-genre (in western cinema, at least), replaced by a quiet naturalism that’s both charming and utterly engrossing.

Central to I Wish, and purportedly the very reason Kore-eda wanted to make the film, lies the Kyushu Shinkansen Line – not only a physical embodiment of Japan’s technical and economical prowess, but also a beacon of hope and future prosperity for the director’s finely sculpted cast of characters. Both Koichi and Ryunosuke see the line as a means of piecing back together their splintered family unit, whilst the inhabitants of both Kagoshima and Hakata can see the commercial benefits of a bullet link between the two towns. Further still, each of the two boys’ lovingly defined school companions harbour their own personal desires, from dreams of becoming actress to bringing a dearly departed pet back from the dead.

Now firmly back on track after the unsatisfying and not entirely successful Air Doll (2009), with I Wish, Kore-eda has once again cemented his status as one of contemporary Japanese cinema’s finest exponents. A genre-striding magician with more than just visual trickery up his directorial sleeve (although one montage sequence in this latest endeavour is, quite simply, outstanding), Kore-eda may very soon find that wider audience that his nuanced, yet approachable films so richly deserve.