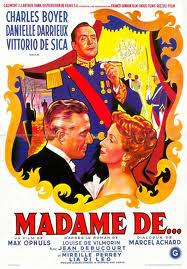 Leading American film critic Andrew Sarris once nominated 1953’s Madame de… as his candidate for ‘the greatest film of all time’ – high praise indeed. Meanwhile, his principal critical detractor, Pauline Kael, called Ophüls’ film “perfection”, marking one of the few times the pair actually agreed on something. Most of the disquiet emanated from the auteur theory – which Sarris championed and Kael loathed – but both considered director Ophüls the most flawless of craftsman, with the exquisite design and frictionless elegance to make the heart sing and weep in equal measure, seen in such works as Letter from an Unknown Woman (1948) and La Ronde (1950).

Danielle Darrieux plays the eponymous comtesse in fin-de-siècle Paris, forced to sell her earrings that her husband Général André de (Charles Boyer) gave her as a wedding present. When her husband finds out, he buys them back and gives them to his mistress. She then pawns them to Baron Donati (Vittorio De Sica) in Constantinople, who then brings them back to Paris, and into the life of Madame de… again. As the earrings pass from person to person, and as time and circumstances move on, they acquire different and deeper meanings. 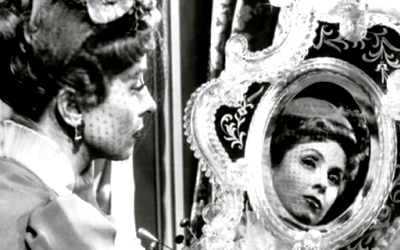 Like all of Ophüls’ sumptuous films, Madame de… is flawlessly executed, with the camera swooping and gliding through ballrooms as if it were waltzing through them itself. The director’s restless gaze is never a virtuoso performance for its own sake; movement conjures a stage of desire – offering the possibility of changing or evolving – moments analogous to the laws of gravity and the natural movements of the soul. Madame de…, like the ellipsis in its very title, makes the flow of time something material, and the passing of it so precious, that the visual brilliance of the film becomes attached to the characters.

In the famous, unashamedly romantic ballroom scene, Madame de and Donati waltz in one continuous motion across days and weeks, with Donati, in each ballroom, enquiring about her absent husband’s health, at first politely, and then, with each step, more and more in love. The swirl of the world brings the false opulence of the surroundings into view; the balls, the robes, the jewels, the servants, the finery, and the verisimilitude of Madame de. She is always acting, because that is what the world around her does.

The lavish decorations on display in Madame de… enact how she comes to see herself and how she hopes to be seen by the world around her. Her husband calls her “superficially superficial”, which means, like Ophüls, she is surface and style – yet not without a sense of genuine heartbreak and loss.