Evoking The Blair Witch Project (1999) with its opening snippets of residents alluding to a local urban legend, at first glance Community (2012) appears to be yet another entry into the found footage sub-genre. However, Jason Ford’s debut feature swiftly discards such trappings, revealing itself as a modern British hybrid combining the recent ‘hoodie horror’ trend with a more classic genre trope; the inbred hillbilly. Unlike the protagonists in Daniel Myrick and Eduardo Sánchez’s cult chiller, this film’s fledgling filmmakers are not trekking into an ancient forest, but a present-day equivalent, a feared council estate.

Supernatural scares are in short supply as the film focuses on the more horrifying aspects of humanity, and despite an interesting opening, the end results are something of a mixed bag. Long since isolated from the rest of the world, the Draymen Estate is said to be a haven for drugs with tales of people never able to escape once having gone there. The perfect setting for a student film, then, as Isabelle (Jemma Dallender) and Will (Elliot Jordan) arrive to document the plight of the residents. 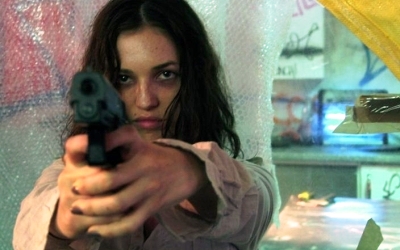 The pair quickly come into contact with a group of eerie children though, and things only get worse when the populations drug addiction is revealed to be the least of the estate’s problems. With residents either strung-out on a potent strain of marijuana or pumped up to animalistic proportions, they don’t like outsiders poking their noses in and the ominous shadow of ‘Auntie’ (Paul McNeilly) hangs over everyone. In its opening exchanges, Community sets up a couple of recognisable leads in the fledgling director and her cameraman. Familiar conversations about filmmaking as a drug, and Isabelle’s subsequent ‘addiction’ seem to be creating a nice parallel as the narcotic-fuelled basis of the estate is discovered.

This plot-line is jettisoned, however, for a much less convincing plot strand that involves Isabelle’s ulterior motives being slowly revealed and the film soon loses its way. Similarly, the beginning manages to tune in to a creepy ambiance and whilst the band of kids is by no means a pinnacle of the motif, they are suitably unsettling. As the narrative ramps up and the other bestial residents arrive amidst a cacophony of grunts and howls, the unnerving atmosphere dissipates. A little bit of this is clawed back via the unremittingly demented ‘Auntie’ once she is revealed but the atavism supposedly caused by smoking corpse-infused dope – or something – is convincing nobody.

Community’s bleak finale and disquieting social undertones suggest a film more interesting than the one that audiences finally get. Lacking any real scares or thrills, there is a feeling that it could have been a considerably more remarkable, but there’s probably just about enough gruesome here to mollify fans of gritty urban horror.

Jason Ford’s Community is available to own now on DVD. Order from Amazon here.