In his feature debut, Babeldom (2012), award-winning British experimental animator Paul Bush has made an old-fashioned visual essay exploring the very concept of a city. Referencing the biblical ‘Tower of Babel’, the film numerous incorporates images from London, Dubai, Berlin, Shanghai, Barcelona and Osaka, to build up a palimpsest vision of the modern day metropolis for the watching viewer. As an archaeologist states at the beginning of Bush’s unconventional effort: “The past is here, under our feet, we can’t retrieve it, but we walk over it every day of our lives, until we die and become a part of other people’s past”. 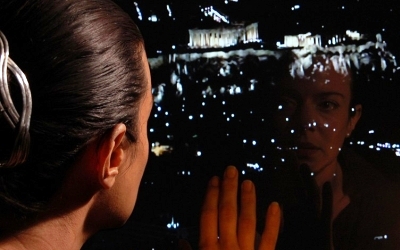 Across this concrete landscape in which past and future are united in the present, two isolated lovers attempt to communicate, one from inside the city and the other from outside. The intention, presumably, is to debate the ability of mankind to unite through language in the confines of a modern city that has outgrown their needs. However, it’s actually the unstable interactions of the film itself that leaves the two lovers unable to communicate fully. Their voiceovers – delivered by Youla Boudali and Mark Craven – accompany disconnected footage from a series of urban landscapes and attempt to give order to the chaos of machine age by reclaiming the human means that created it.

Bush is preoccupied with places in which architecture has surpassed the ordinary requirements of everyday life and the human is at the mercy of the metropolis. A series of journeys through the tunnels of nuclear shelters reveals new shapes as the camera moves through them. Set to a mix of operatic music and a great cacophony of grinding noises produced by the clatter and whirl of modern city life, they become portals of space and time, voyages through history and into an unknown future. Yet, although Bush’s Babeldom raises philosophical issues of time, space, history and memory, only as a purely sensory experience does the film achieve anything close to resembling truly passionate meaning.

The poetic representation of the city is counteracted by specially animated sequences (which look like they have been made on a 1980s computer), incorporating the most recent research in science, technology and architecture – as Bush did in his 1996 short, The Rumour of True Things – but these detract from the central redeeming quality of the film. At its best, Babeldom recalls Chris Marker’s La Jetée (1962), Fritz Lang’s Metropolis (1927) and Dziga Vertov’s Man with a Movie Camera (1929) – but like the modern city, is harsh, unyielding and emotionally distant.