The somewhat bemusing tagline for Parker (2013) – the latest brusque and thundering action-thriller starring British cult hero Jason Statham – states that ‘Payback has a new name’. Indeed, the titular Parker, the hard-boiled anti-hero of Donald Westlake’s series of crime novels, has appeared before, under a different name, in Mel Gibson’s Payback (1999). Before this, Lee Marvin played the similarly blunt-named ‘Walker’ in John Boorman’s Point Blank (1967), a detached, indestructible force, unwilling to halt the bloodshed until he has completed his quest – and like Statham’s Parker, not so much hard-boiled as he is burnt to a crisp.

Statham’s Parker is a master-thief with varying levels of compassion and an arbitrary code of ethics: “I don’t steal from anyone who can’t afford it, and I don’t hurt anyone who doesn’t deserve it,” he grunts. After executing an elaborate heist at the Ohio State Fair, his accomplices betray him and leave him for dead at the side of the highway. Somehow, he survives – only adding more scars to his bricked torso – and follows their trail to Palm Beach for that infamous ‘one last heist’. 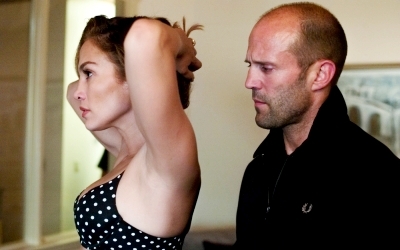 Once at Palm Beach, Parker unwittingly commissions the beautiful Leslie (Jennifer Lopez), an ebullient Miami realtor, recently divorced from her playboy husband and living with her cantankerous mother (Patti LuPone), in his two-for-one revenge and robbery plot. Parker, Leslie, and every other character in the film, is motivated solely by money; even sex – the other prerequisite in the Hollywood action movie contract – is only had by people who have money, or are in the business of getting it. Parker has a girlfriend, his mentor’s daughter, and upon meeting Leslie he strips her down to her underwear to check for a wire instead of sleeping with her. It’s hardly subtle, but neither is it trying to be anything that it’s not.

Lopez is hardly written with the moral scope of her US Marshal in Steven Soderbergh’s Out of Sight (1998), her best film, but no one in Parker has an emotional trajectory that goes beyond the bottom of their wallet or the reach of their fists. Director Taylor Hackford is a schooled Hollywood veteran (An Officer and a Gentleman, Ray) making his first action movie and, unlike the prefix of his surname might suggest, is experienced enough to adroitly balance chaos and coherence.

Statham has, of course, brought his rough-and-ready charisma to similar roles before, and provides a gleefully unedifying release from the weighty themes and near three hour running times of Oscar season. Like The Last Stand (2013) and other recent action movies, Hackford’s Parker is a self-conscious attempt to reinstate the gruff and pulpy roots which used to dominate action cinema over the visual gymnastics and digital spy moves of recent superhero movies.