They say the night is darkest just before the dawn. After ten minutes of the latest 1980s remake to hit UK cinemas, Dan Bradley’s Red Dawn (2012), you’ll have wished for perpetual and eternal twilight. Sat on the shelf for the last few years, it’s not hard to see why MGM kept this there for so long. It’s a terrible mess of a movie, and one which may somehow beat Movie 43 (2013) to the crown of worst of the year (so far). On paper, there’s a decent enough premise here, as a group of resolute teenagers – led by brothers Jed and Matt (Chris Hemsworth and Josh Peck) – witness their American town invaded by North Korean soldiers. 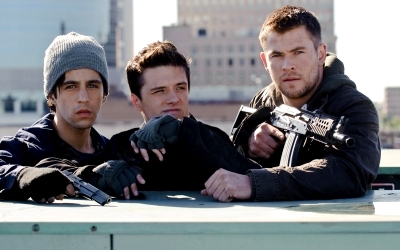 Spurred on my Jed’s army credentials, the gun-toting teens set out to seek justice for their fallen/captive kinsmen, as well as their father – brutally murdered at the hands of the invading army. Sadly, nothing even vaguely resembling excitement or tension is evident here. Red Dawn is horribly dull throughout, with no pace or vigour to its action, no purpose to its story, and no investment in its characters. Even its outlandish premise requires such suspension of disbelief that it borders on the ridiculous, like an action-adventure directed by the goofy Farrelly brothers. Bradley tries his darnedest to make a lasting impression, seeking some sense of shock and awe with shaky cameras and suitably loud set-pieces. But rather than making the film better, he only succeeds in condemning his turgid rehash.

Occasional thunder god Hemsworth tries his best to save the film from complete ineptitude, but even the mighty Thor is bound to take a few wrong steps. At the very least, his charisma and star power do lend some weight to his scenes, even if Peck tries his hardest to make him look just as god-awful as he ultimately is. Even the inclusion of Watchmen’s Jeffrey Dean Morgan does little to change the abhorrence of proceedings – he too, it appears, is powerless to redeem the film’s gargantuan failings. It’s always hard to take apart a movie that has such a likeable leading man at its core, especially if he’s proved himself competent (at the very least) on several recent, noteworthy occasions. It’s almost tragic then, that Bradley’s Red Dawn reveals itself to be yet another unwatchable misfire in a long line of poorly-conceived, poorly-made cult movie remakes.