Eschewing the type of gritty social realism commonly associated with regional British cinema in favour of an aesthetically heightened approach, Scott Graham’s directorial debut Shell (2012) wouldn’t look out of place in competition at any of the major European film festivals. Settling instead for a premiere screening at last year’s BFI London Film Festival – where it garnered significant praise – Graham’s first feature is a supremely streamlined exploration of both familial symbiosis and suffocating isolation, playing out within a lonely petrol station set against the majestic backdrop of the remote Scottish Highlands.

With the exception of the odd wind-battered motorist and/or accustomed regular customer, 17-year-old Shell’s (newcomer Chloe Pirrie) only company at her petrol station residence is her quiet, seizure-afflicted father Pete (Game of Thrones’ Joseph Mawle). On the cusp of maturity, both physically and emotionally, Shell spends her days pottering around the forecourt, staring down at the far-off village below. Her father, on the other hand, busies himself with road scrap and rusted machinery, burdened by the past departure of his beloved wife when Shell was just a child – and the overriding fear that his daughter will one day do the same, leaving him defenceless against his condition. 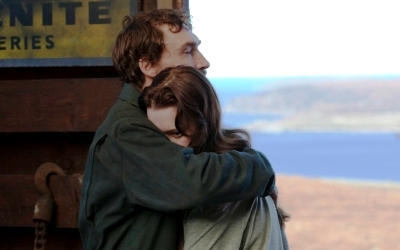 Despite receiving criticism from some quarters for a perceived lack of integrity and substance, Graham’s Shell certainly has the potential to become one of the most significant low budget British releases of recent years – thanks in no small part to Yoliswa Gärtig’s sublime cinematography. Forgoing weighty exposition and fatuous contrivances for a deeply visual storytelling experience, Graham lets his two excellent leads and the surrounding Highland expanses do the talking for him, blending together theme and form with remarkable assurance. Whilst the film’s ‘European’ sensibilities may put off some, it serves as a timely reminder that British cinema needn’t always be reduced to tales of gangs and council estates.

Fortunately, Graham isn’t simply content with resting on his technically proficient laurels, having undoubtedly uncovered a young, prodigious British talent in the form of shining light, Pirrie. Timid, yet at the same time full of inner-strength and raw determination, she transforms the doe-eyed Shell into an ever-watchable amalgamation of daughter, mother and wife – with oft-uncomfortable results, unavoidably evoking thoughts of Carl Jung’s Electra complex. As dependent on the love and occasional warmth of stony-faced father Pete as he is on her perpetual care, the pair’s strained bond is similarly schizophrenic, shifting from touching to sinister (and back again) as the minimalist narrative meanders towards its heartrending climax.

More than just a mere calling card for rising talents Graham and Pirrie, Shell firmly lays down the gauntlet for British indie debut features to come, reminding us once again that there’s more to our national cinema than just factory lines and kitchen sinks. Further bolstered by a fine supporting cast that includes Kate Dickie and Michael Smiley, Graham will do extremely well to better this poignant and arresting first outing with his (hopefully now-scheduled) sophomore effort.

To find out which cinemas near you will be screening Shell, visit vivaverve.com.