For a renowned political filmmaker, it’s curious that Ken Loach’s films are at their best when they focus on the more personal elements. Loach has a gift for depicting the arduous everyday struggles of poverty with sensitivity and humanity, but his works are frequently hindered by his inability to deal with the political dimensions with the same care and nuance. Loach is a polemicist and, while it’s difficult not to be swept up in his latest endeavour, The Spirit of ’45 (2013), it lacks the intelligence and sobering insight of other leftist docs like Inside Job (2010) or Alex Gibney’s Enron: The Smartest Guys in the Room (2005). 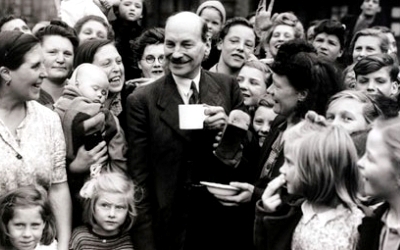 1945 was a key year in British history. After joining together to defeat the Nazis, the British people were ready to leave the hardship of the inter-war years behind and embrace a more collective, compassionate society. Loach’s film uses a combination of interviews and archive footage to present a social and political narrative of the events which led to the Labour Party victory of 1945, the measures taken by that government and the subsequent dismantling of their legacy.

The Spirit of ’45 works best as a people’s history of pre- and post-war Britain; an anecdotal collage of human experience. The interviews are chatty and informal, allowing for a sense of intimacy with the subjects. The stories are, by turns, warm, heartbreaking and moving, but manage to avoid any unnecessary nostalgia or sentimentality. Along with well-judged use of excellent local and national archive footage, the interviews paint a vivid picture of the incredible resilience of a vast number of British people at mid-century. It’s therefore a shame that Loach’s latest has all the political sophistication of a students’ union protest, with its angry tub-thumping and steadfast refusal to consider any viewpoint outside the film’s narrow political sphere.

Though it’s encouraging to see a director in his 70s demonstrate such a fiery sense of youthful radicalism, Loach’s film is too content to adopt the Michael Moore approach of not having a single interviewee offer a contrary argument to the film’s position, leaving the lingering feeling that The Spirit of ’45 would be a better and more persuasive documentary if it was less dogmatic and simplistic in its political discourse. As it stands, it’s a respectable but flawed portrait of national endurance.