Fashioning a compelling yarn from a single shift at a supermarket was always likely to be a challenge for writer/director Maciej Zak. Despite said shift being an extra-long, New Year’s Eve affair, and the staff in question security guards, it still sounds less than riveting. Yet Zak manages to pull it off with his constrained thriller Supermarket (2012). Although it never quite scales the tense heights it sometimes threatens to, it features a healthy dash of pitch-black absurdity to guide audiences into its dubious and dark underbelly. With the doors not yet open, a supermarket is undergoing the final preparations for NYE.

Head of security Jasminski (Marian Dziedziel) is given an ultimatum by the store manager (Przemyslaw Bluszcz); keep the day’s theft down to zero, or the new year will see new security guards. Some time later, a couple arrive at the shop on their way home. The wife stays in the car whilst her husband, Warecki (Tomasz Sapryk), goes inside. When rookie guard and Jasminski’s step-son Himek (Mikolaj Roznerski) thinks he sees Warecki steal something, it triggers a startling escalation of events that result in violence and bloodshed. 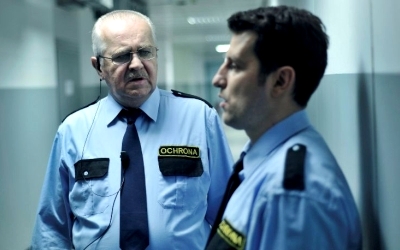 Supermarket drops the audience right in at the deep-end with a non-chronological moment from narrative linearity, whilst providing little context in the process. This, combined with the cold blueish hue as the camera glides through the supermarket like a floor buffer, creates an immediately sense of intrigue. Jokes about out of date fish and mundane workplace tensions carry a surprising air of menace considering the slightly humorous setting, and it seeps to the surface once Warecki has been taken into custody. Dziedziel is excellent as the ever more chilling overseer of the guards and Roznerski does an admirable job as the fresh-faced youth slowly coming to terms with his colleagues’ dubious morality.

The advancing conflict of the central familial relationship gives the plot its emotional thrust, but there’s an awful lot going on outside of this showdown that serves only to distract. Several of Supermarket’s plot strands are sidelined and some are cast aside completely, meaning that whilst the main narrative line receives a fitting conclusion, a lot of the periphery is left naggingly unresolved. Where Zak’s movie earns its bread and butter, though, is in the slow moral decline of the guards as their futures are threatened and only teaching thieves a lesson will do.

As their corruption feels like a foregone conclusion from the off, the descent lacks the tension it may have had but makes up for this with their chilling professionalism; their interrogation over stolen confectionery is sufficiently unsettling on its own. If nothing else, Zak’s Supermarket will make shoppers think twice before munching their way through a bar of chocolate before they’ve reached the till.