With a love of Ealing comedies worn proudly on its sleeve, British caper 12 in a Box (2007) arrives on DVD this week following a limited theatrical run back in March. Although it’s taken a little longer than anticipated to reach the stage of public consumption since its completion, John McKenzie’s farce comes with acclaim on the festival circuit and the seal of approval from Albert S. Ruddy. Luckily, the reservations that might be natural for a film that has struggled to find its way to audiences are, in this case, unfounded; McKenzie directs a thoroughly enjoyable romp with a wonderfully serpentine story. 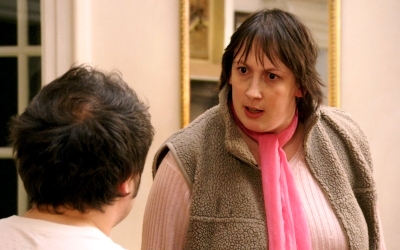 The writers came up with the concept for their film by securing a location and then devising a plot that would keep their characters there. That narrative sees a group of twelve near strangers summoned to a large estate as alumni of the same school. A recorded message informs them that a fellow alumnus has left £12 million in a locked safe in the living room and to secure £1m each, all they have to do is stay on the property – with no outside contact – for 72 hours. So, the arrogant businessman, Alan (Robert Cargill), pious spinster, Alice (Belle Hithersay), singleton Andrea (Katy Wix) and a host of others must all get along for a few days.

As one might expect, staying put is hardly as easy as it might seem and additional strain comes in a variety of unexpected shapes and sizes. Barry (Kenneth Collard) will have to miss his wedding to complete the task and before long his fiancée, Rachel (high profile draw Miranda Hart), knocks on the door. Once on the property, the rules state that she cannot leave and the housemates are forced to take drastic action to stop her. Events become more and more outrageous as 12 in a Box’s narrative progresses and it soon proves impossible to predict which direction the story will twist in next.

From the brow-beaten Barry to Andrea’s ongoing efforts to seduce a fellow inmate, all the way to the regular communions that Alice privately holds with ‘Him upstairs’, McKenzie’s low budget feature is undeniably fun to watch. Nerves fray, clothing is lost, relationships develop, deaths occur, swords are wielded, beds are cheekily hopped to and from, and all the while the timer slowly counts down to release the coveted dosh. 12 in a Box may not scale the heights of the best Ealing comedies, but it embraces their spirit with aplomb.