Some films, though hard to watch, make enlightening viewing. Vito (2011), the new biographic documentary by director Jeffrey Schwarz about the American film journalist and gay activist Vito Russo, is one such exercise. The film charts Russo’s life from his childhood in New Jersey to his role as one of the leading lights at the centre of New York’s gay community during the 1970s and 80s. One often has to question what facilitates the wider release of a made-for-TV documentary (as this is), and whether it succeeds in its objectives. Fortunately, as a study of an influential period in the history of cinema the film is fascinating. 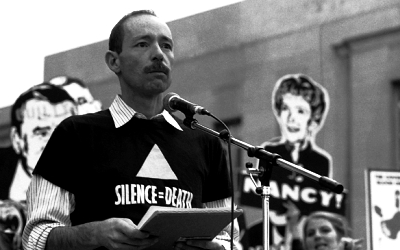 Working in the film department of MOMA whilst studying at university it didn’t take long for Russo’s interest in the hitherto untapped subject of gay and lesbian representation in cinema to come to the attention a member of the department’s senior staff. As a result, Russo began what would become his lifetime’s work, writing the influential and groundbreaking book The Celluloid Closet – an in-depth study of the way homosexuality was represented through motion pictures and in particular those from Hollywood.

In his later years, much of Russo’s time was taken up promoting and lecturing on his book, and as such the documentary’s focus on this aspect is enthralling, from both cinematic history and cultural viewpoints. Equally revelatory is the chronicling of Russo’s involvement with the gay rights struggle through the founding of the organisations GAA (Gay Activists Alliance), GLAAD (Gay and Lesbian Alliance Against Defamation) and ACT UP (Aids Coalition To Unleash Power). Up to this point, the attitude of society as a whole was clearly homophobic, and the passion and fearlessness of Russo and his associates went a long way to bringing about the freedom and liberty experienced today.

However, as shown throughout Vito, much of the way they went about achieving their aims could be seen as alienating, doing little to dispel the image of what the public saw as an antagonistic and militant minority. Like the life of Russo himself, this HBO documentary is both divisive and eye-opening and, if it achieves nothing else, it should at least bring the pioneering life and work of this courageous man to a wider audience.