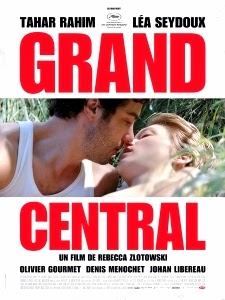 “We bring light to people’s homes” says Gilles (Olivier Gourmet), a middle-aged foreman in Rebecca Zlotowski’s Grand Central (2013). The protagonists of her latest film are young, unskilled French workers who, at the end of their tether, gladly jump at the chance to work in the dangerously radioactive areas of France’s fifty-nine nuclear power stations. Following a brief training period, Gary (Tahar Rahim, in his second film of the London Film Festival) takes to the work with a sense of adventure. At first it’s simply an easy way to make money, with the paternal Gilles continually watching out for him. 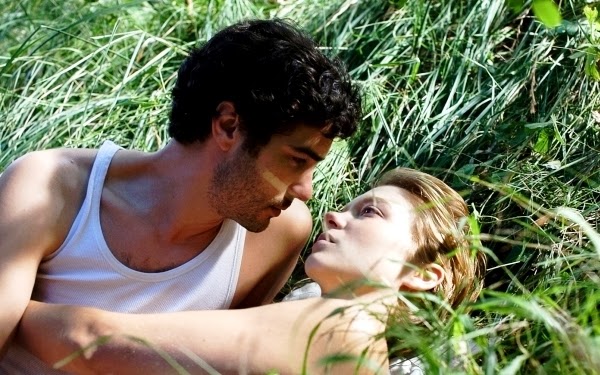 The inference is that it seems, for once, that this graduate from the school of hard knocks has finally caught a lucky break. Gary is fascinated by the work and, being a quick-learner, prides himself on beating his colleagues. In the caravan park that serves as a worker’s camp a sense of community thrives, but there is also the temptations offered by a colleague’s young wife, Karole (Blue is the Warmest Colour star Léa Seydoux). However, following an incident Gary’s contamination levels become dangerously high and there is a risk that he might be laid off if his exposure to radiation increases. In order to keep in the role and to stay near to Karole, Gary begins to foil the safety procedures at great risk to his personal own health.

Zlotowski’s Grand Central can be read as a straight-out denunciation of French reliance on nuclear power, as well as  the shoddy work practices and insufficient checks which allows for the current situation to become more perilous. However, its scope is arguably far broader than that. The plight of the workers is symptomatic of a society that’s exploiting its most marginalised young men to carry out the dirty work that is central to its economy. And yet, this isn’t another exercise in miserablist social realism. Rather, Zlotowski contrasts the shower rooms and industrial interiors of the nuclear power station with the sun-drenched and lushly-green idyllic pastoral scenes surrounding the caravan park.

The young men are full of beans, and it’s good to see Rahim finally having some fun. He might be a man with a troubled past – “You don’t know me”, he says to a friend – but Gary is trying his best to make a go of it and with first his friends and then Karole, he’s beginning to enjoy life; even if his work at the power station is slowly destroying him. Bolstered by a wonderful ensemble cast that includes Denis Ménochet (M. Petit from Tarantino’s Inglorious Basterds) and a smartly-written script, Zlotowski’s Grand Central is a fascinating film on an urgent and seldom-explored situation.