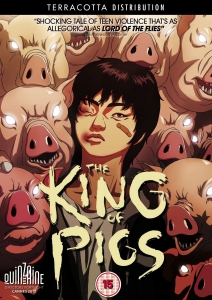 Korean animation has skulked in the shadows for some time: South Korean animation houses have long performed the grunt work for countless popular US cartoons – from The Simpsons onwards – whilst homegrown efforts have always had to compete with the established heritage of the neighbours on the other side of the Sea of Japan. However, a quiet renaissance has occurred over the last few years and the Lord of the Flies-esque The King of Pigs (Dwae-ji-ui wang, 2011) is one such example. Directed by débutante Sang-ho Yeon, it’s a grim morality tale, mostly told through flashbacks to a violent school classroom.

We open on a woman, lying dead on a dining table. This is the wife of Kyung-ming, a depressive CEO, and in the wake of his business collapsing, it is implied that he murdered her. This sudden spark of barbarity compels Kyung-ming to reconnect with his old school friend, the leaden-eyebrowed Jong-Suk, now working as a downtrodden ghostwriter in a publishing company, his personal ambitions fading rapidly. The two men have not spoken in fifteen years, and together they softly recall their troubled years spent in middle school, where the roost is ruled by a triumvirate of bullies, known as the ‘dogs’. 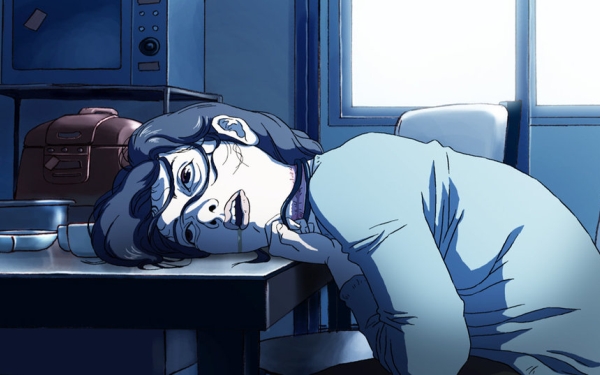 The dogs spend their days delivering savage retribution to the ‘pigs’, the classmates unfortunate enough to be poorer or less intelligent than they. Then along comes Chul, an angry, fearless little boy who dares to challenge this perverse status quo; with Jong-suk and Kyung-ming at his side, he becomes the titular King. Chul, pure raging id, speaks confidently to the boys about accepting the evil that exists in all humans, and for a while it seems that revenge – a favoured theme in South Korean cinema – will rear its head. But this is less a bloody vengeance thriller in the Park Chan-wook mould than it is a bleak social satire on class.

The dogs often whisper of the “school’s atmosphere” being disturbed by the younger boys, and the script delivers biting critiques of the corrupting cancers worming their way through Korean society. The King of Pigs is also depicted in crisp, utilitarian animation, harnessing a neat hybrid of hand-drawn and computer-assisted techniques. You wonder, though, were it not for the brutal child violence, whether the material would be better suited to live-action. Most scenes are dialogue-centred and set in a single classroom. Fared against the ambitious spectacle of its anime cousins, the film is visually unmemorable. As it happens, much of the film struggles to sway your attention.

Yeon’s film builds slowly and surely but hits a midway point of extreme stagnation, and only in its closing minutes attempts a proper climax. Even this dénouement descends into overwrought melodrama for a rather predictable rooftop finale. With its weighty themes of power-plays and aspirational childhood struggles, The King of Pigs has ambitious designs, but it’s ambition that could have furnished a more interesting and consistent story.