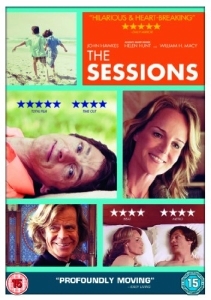 Based on a true story, Ben Lewin’s emotive new US drama The Sessions (2012) follows the heart-felt journey of Mark (John Hawkes), a man trapped in an iron lung after being stricken with polo as a child, and his quest to ultimately lose his virginity. Played with incredible conviction by journeyman Hawkes, Mark is a man who – despite being paralysed from the neck down – relishes all that life has to offer. Being trapped inside his head for the best part of his life, Mark writes poetry in an attempt to make more sense of the world around him. Frustrated with having never had sex, Mark turns to a councillor who suggests a sex surrogate.

This surrogate comes in the form of Cheryl – portrayed by an unabashed Helen Hunt, who casually bares all for the audience in order to convey her sexually liberal attitudes. Interspersed with light theological conversations with his priest, Father Brendan (William H. Macy), the film takes a run towards the romantic when Mark falls for Cheryl, despite the agreement that there would only be six sessions and no emotional attachment. 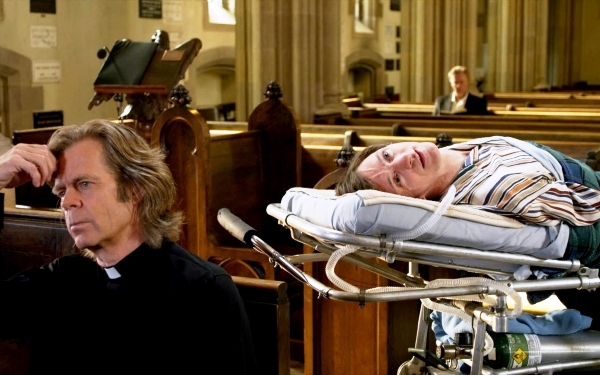 Importantly, the sex scenes depicted in Lewin’s The Sessions have been handled with honesty and thought. When Mark’s attempts reach those moments that most of us experience at some point in our teens, it never feels exploitative. These moments the honesty of the emotional turmoil and psychological difficulties that Mark faces after years of paralysis are contained in well-structured dialogue between Hawkes and Hunt as they lie next to each other in bed.

Macy’s supporting role as Father Brendan provides some much-needed moments of light relief. There is also a rounded realism to the character, who happily discusses Mark’s sexual needs in the full, slightly comic realisation of his own abstinence. Whilst this is obviously an important story to tell (exploring a problem not often discussed in cinema, or anywhere else for that matter), the drama at times disappoints and, even with full frontal nudity, feels too comfortable in its skin, losing its emotional edge in the second act.

Hawkes’ performance undoubtedly warrants several award nods, but the overall drama found within  Lewin’s The Sessions lacks the necessary weight that the subject matter could have easily handled. This issue aside, this carefully-handled, anti-patronising drama successfully tells the story of one man’s struggle to find love, both physical and emotional, whilst avoiding emotional manipulation and/or overt cliché.

This review was originally published on 18 October, 2012, as part of our London Film Festival coverage.