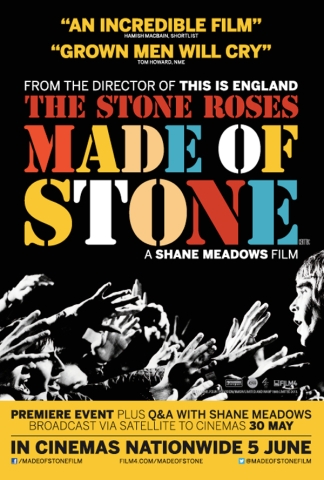 There’s no denying that Shane Meadows’ latest film, The Stone Roses: Made of Stone (2013) – which details the impact of the Manchester-based band – is going to divide opinion. Fans of the group, which broke through in the late eighties with tremendous success, will relish in the multitude of archive interviews and gig footage. Meadows’ boyish glee and borderline obsession translates into palpable energy that thrusts you through the 90-minute doc. Early on in the film, Meadows recounts how he missed out on attending the now-famous Spike Island gig after dropping a tab of acid and giving his ticket away to a stranger.

From here on out, Made of Stone is less concerned with the finer biographical details of the band and more interested in Meadows making amends for his teenage error. Swiftly dropping the a-typical music documentary structure we actually receive relatively little information regarding the formation of the band. It is perhaps comparable to last year’s Shut Up and Play the Hits, which dealt with the final days of the LCD Soundsystem. Like Will Lovelace and Dylan Southern’s documentary, Meadows crafts what is essentially fan-porn. 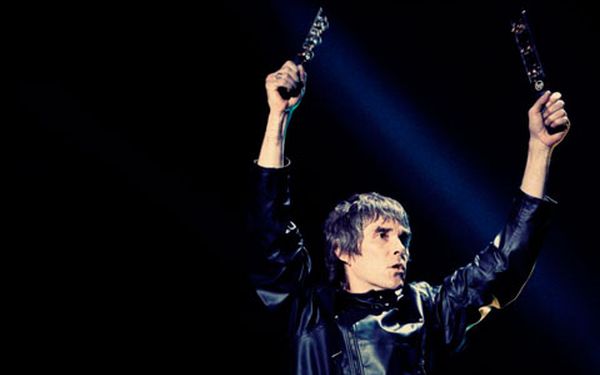 In Made of Stone, the only time that Meadows opts in on conventional structures is when we occasionally hear of the band’s well-known squabbles. Yet the main thrust of the film, and the central reason why the documentary makes such addictive viewing, lies elsewhere. What we receive instead is an infectious, artful, tribute to the Manchester lads ‘avin’ it large with a director who can’t believe his luck at getting to make a film about his favourite band. Meadows demonstrates the sheer mania that surrounds the bands frontman Ian Brown, who possesses a cult-like, near messianic status. This is neatly demonstrated when, in preparation for the Heaton Park gig, the band put on a warm up show giving away tickets to fans.

Amassed outside the small venue, we see mothers with three-week-old babies and fact-quoting fans laden with memorabilia, desperate to prove their undying loyalty to the band. All of a sudden the focus moves from the band to the love that the fans have fir them and what they are willing to do to hear them live. There are bold moves by Meadows, including the presence of a 12-minute solo from ‘Fool’s Gold’, where the fans and the band disappear and the music take centre stage. There is also an incredibly attractive ellipse which stresses the craze the band cause when Brown borrows a fan’s phone, filming himself and the crowds with quotes from Alfred Hitchcock and William Burroughs recited over the action.

Is Meadows’ Made of Stone a fanboy movie? Absolutely and unashamedly, so opinion will easily fall one of two ways. For those who care little for the Manchester band, this will perhaps be a bemusing cinema experience; for those who grew up with the Roses blaring out over their hi-fis, however, this is a beautiful accolade that celebrates the band in all their pomp and glory.