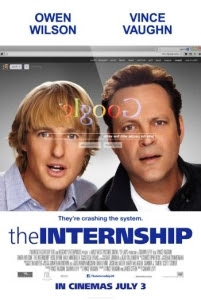 This year’s Google work placements had over 40,000 applicants. However, a few more films like Shawn Levy’s The Internship and the next generation of graduates could turn towards Bing (or even Snap.do). Movies are often derided for their ultra-cynical product placement, but in The Internship this takes on worrying new significance as Vince Vaughn and Owen Wilson become guest stars in a two-hour corporate video. Vaughn and Wilson pick up their 2005 Wedding Crashers schtick as Billy and Nick, a pair of salesmen who can talk their way out of anything – except, it would seem, this film and its unabashed Google adoration. 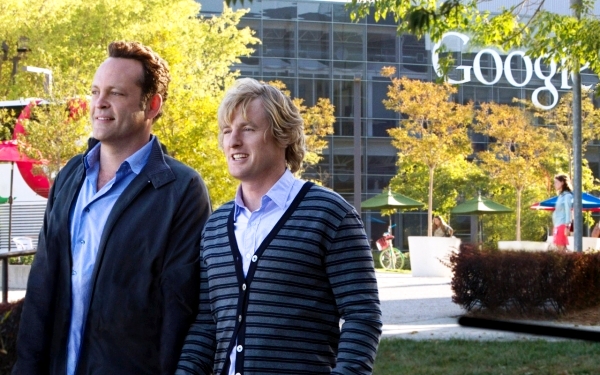 Sacked from their watch-flogging jobs, these are two old-fashioned men looking for direction in the newfangled world of technology and unpaid work, who end up landing an unlikely summer internship at Google. Upon arrival at the hallowed GooglePlex in Santa Clara – a magical kingdom of free food and nap pods – they join up with a team of generically-coded social outcasts (the handsome geek, sex-crazed virgin, coddled mommy’s boy etc) for a series of challenges that will land the winners guaranteed jobs at the company. Between all the references to Google Docs, Google+, Gmail, Google Maps, Google Ads and ‘Googliness’, there are infrequent laughs to be had, most of which involve Billy and Nick trying to ‘fit in’.

The initial webcam interview that scores the duo their internship is uproarious, as is their later riotous search around campus for a “Professor Charles Xavier” who, as their team leads them to believe, could help them with a task. Vaughn and Wilson’s old, bouncy rapport is the only genuine thing in the film and it’s testament to them that they can make the stench of this unbelievable, frankly sinister premise even slightly endearing. The studio releasing the film, 20th Century Fox, didn’t get paid to make the film – like most interns, incidentally – which reveals an astonishing reality about what lengths studios are prepared to go to build hits and gather audience data.

With any luck, and hopefully some old school audience common sense, big-screen adverts like Vaughn and Wilson’s The Internship will never find full-time employment. Whatever exigent problems the film industry may currently have – as Steven Spielberg, George Lucas and Stephen Soderbergh have highlighted recently – corporate overlording will only create contempt and bad films, like Levy’s dire comedy. Fincher’s 2010 Oscar winner The Social Network can rest easy.