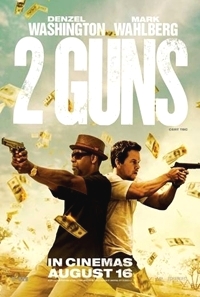 In what’s been a difficult year for summer blockbusters, it seems Hollywood is returning to the venerable set up of the good ol’ buddy cop comedy for cheap thrills and fast bucks; firstly with Paul Feig’s The Heat, which opened last week, and now 2 Guns (2013) – a brisk, unpretentious crime caper from Icelandic director Baltasar Kormákur. The sub-genre lives and dies by the chemistry of its leads, and with Denzel Washington and Mark Wahlberg – who are always devilishly pleasing to watch, especially in comedy roles – Kormákur ensures that his own contribution is more Midnight Run (1988) than Samurai Cop (1989). 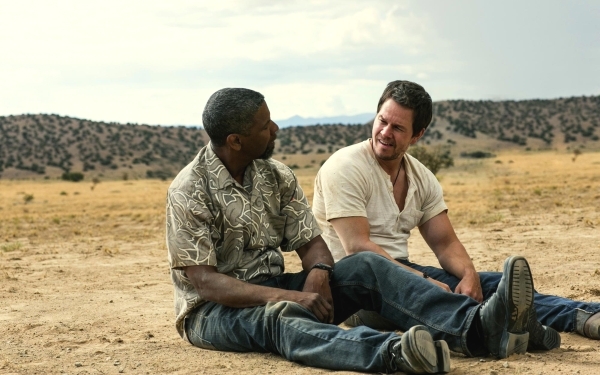 Washington and Wahlberg pick up the schtick of Mel Gibson and Danny Glover’s Lethal Weapon duo as two mismatched friends: Wahlberg as garrulous tough nut Stig, a definite nod to Gibson’s Riggs; and Washington as smooth operator Bobby, a sexier version of Glover’s retiring family man. The difference this time, however, is that they are both undercover bank robbers. Bobby is a DEA agent and Stig is a Navy intelligence officer, with neither of them knowing this about the other. They’ve both been assigned to steal $3 million in cash belonging to Mexican drug lord Papi Greco (Edward James Olmos), but things are soon complicated by military types and government officials (including a terrifically oleaginous Bill Paxton).

Based on the 2008 BOOM! Studios comic series by writer Steven Grant and illustrator Mateus Santolouco, the hyper-convoluted plot of 2 Guns is fluidly articulated by Kormákur, who has demonstrated a gift for laying out complex action sequences with a perfect mixture of chaos and coherence, most notably in Contraband (for which he first teamed up with Wahlberg). 2 Guns is an altogether brighter film, however; a Tex-Mex neo-western that embraces its dusty, southern setting, which stands out commendably amidst all the blood thanks to cinematographer Oliver Wood.

If Kormákur does manage to add something to the well-worn 1980s buddy cop comedy, the problems here remain familiar. The solitary female character comes in the shape (which we get to admire frequently) of Paula Patton’s Deb – a female DEA agent and Bobby’s part-time lover – whose only meaningful actions revolve around her relationships with men. Perhaps that’s to be expected of 2 Guns, where so much reliance is placed on male banter. Thankfully – and this is not to be taken for granted – it is at the very least inoffensive, and at times genuinely funny and charming.