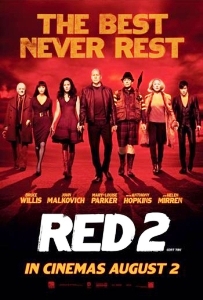 We’ve certainly been heavily dosed with geriatric action thrillers in recent years, with Arnie taking on The Last Stand, Sylvester Stallone heading up The Expendables and Bruce Willis popping up in anything his agent prescribes. However, none can boast the hospital waiting room worth of talent of Red 2 (2013). Helen Mirren, John Malkovich, Catherine Zeta-Jones and Anthony Hopkins join Willis as contract killer OAPs codenamed REDs – Retired, Extremely Dangerous – who first moseyed onto our screens with the sleeper hit original in 2010. Willis reprises his role as former CIA officer Frank Moses, who’s now settled into domesticity. 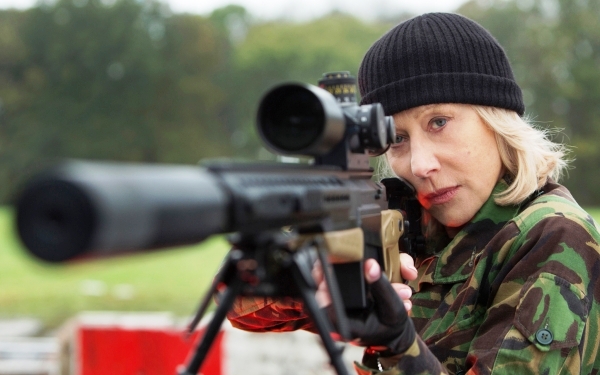 Alongside sweetheart Sarah (Mary Louise Parker), Frank is now more used to doing the weekly shop at Costco (the first of many shameless product placements) than pistol-whipping hired goons. He’s lured out of retirement, again, by his unhinged pal Marvin (John Malkovich), when they are falsely tied with Cold-War era nuclear plot by the name of ‘Nightshade’. They are joined by a host of characters who oscillate between goodies and baddies: Helen Mirren’s Dietrich-esque MI6 agent; Frank’s old flame, Russian spy Katja (Catherine Zeta-Jones); mad scientist Dr. Bailey (Anthony Hopkins); and Byung-hun Lee, ‘the world’s most dangerous assassin’ who has a penchant for engaging in brutal unarmed combat.

Sounds fun, right? Unfortunately, the reality is dutiful and underwhelming. Based on a comic book miniseries by Warren Ellis and Cully Hamner, director Dean Parisot seems intent to make his film in the style of other comic book adaptations – it even has that generic action film sheen – but Red 2 would benefit more from tighter plotting and a character-driven approach: something more akin to 1999’s Entrapment or 1992’s Sneakers than Man of Steel. As it is, it’s not thrilling enough to work as an action movie, funny or heartfelt enough to work as a comedy, and certainly not deft enough to handle both. Still, there are moderate diversions, thanks mainly to the seasoned-pros on show.

Willis is more charming than his off-set interviews make him appear, while Parker is his perfect match with her own sweetness often belied by her sometimes stoic facial expressions. The real heroes of the piece, however, are undoubtedly Malkovich and Mirren; Malkovich, for his avuncular goofiness (where else can we see him decked out in fruity Carmen Miranda headwear?), and Mirren for bringing classiness to the messy business of contract killing – except perhaps when dual-wielding a pair of pistols out of both windows of a spinning Lotus Exige. More of the same then, but Red 2 may still rediscover that same audience who flocked to the first outing.