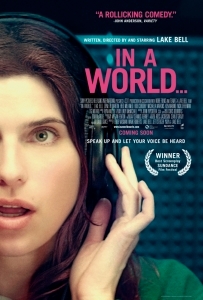 Lake Bell’s directorial debut In a World (2013), named after the auspicious phrase heard in bombastic film trailers, is a smart indie comedy about the voiceover community on the fringes of Hollywood. The director’s take on a world unfamiliar to even the most ardent of film fans may be ultimately inconsequential, but it’s a sharp and witty calling card for Bell. While the arcs are familiar, the supporting cast are all adroit comics, helping to create a warm, collegiate feel. Bell herself also plays the lead and pitches her performance somewhere between the screwball heroines of the 1930s and the oddball quirk of Zooey Deschanel. 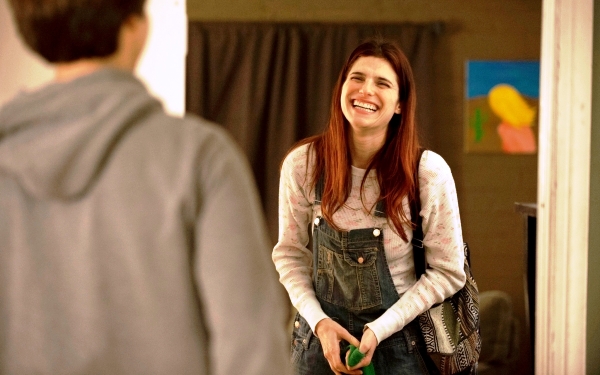 In a World follows scatterbrained vocal coach Carol’s (Bell) attempts to become a first-rate voiceover artist like her self-satisfied father Sam (Fred Melamed). After the death of voiceover king Don LaFontaine, the man who coined the film’s titular phrase, Sam and a handful of colleagues, vie for the place as the person who gets to do the voiceover for the trailer of an upcoming Hunger Games-like blockbuster quadrilogy and utter the immortal words of the maestro; “In a world…”. But the male-dominated eco-system is thrown into crisis when Carol enters the fray. Bell pitches the battle-of-the-sexes material well, making comic hay out of the vanity and pomposity of the reigning alpha-males of the trailer voiceover game.

Whilst the misogyny of the industry is clearly lamentable, the director attacks the boorish chauvinism through laughter, giving the film a lightness of touch while still skirting around serious issues. Bell can still be efficiently scathing when she wants to be, infusing a final, surprising showdown with a studio head (the welcome cinematic return of Geena Davis) with a quiet ferocity, giving the sense that Bell may be casting the satirical net wider than she initially appears to be. While there are plenty of fantastic moments, there are fleeting instances where the novelty of the central concept feels insufficient to sustain a 90-minute film.

The myriad digressive subplots which canter through Carol’s sister’s flailing marriage as well as an unmemorable suitor feel like unnecessary padding, even though they feature some delightful turns from Rob Corddry and trailblazing stand-up comedian Tig Notaro (making her debut film appearance). It’s fortuitous that In a World’s main plot is strong enough to carry the picture. Additional credit should be given for the amusing film-within-a-film structure which, while not up there with Bruce Willis’ death row antics in Robert Altman’s The Player (1992), is still consistently funny and strangely prescient.