Part of a new generation of young horror directors, Ti West arrives in Venice with The Sacrament (2013), a found-footage frightener based loosely on the true events of the Jonestown Massacre of 1978. Updating the story, West has a trio of filmmakers – Sam (A.J. Bowen), Jake (Joe Swanberg) and Patrick (Kentucker Audley), from online media outlet Vice – flying to a distant, undisclosed, but third-worldly location to meet with Patrick’s once-troubled sister. After a drug abuse-riddled past, she has apparently become a part of a religious community that lives in isolation from the world in the small American town of Eden Parish. 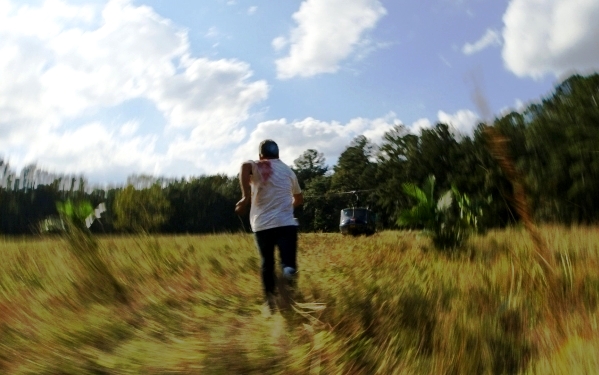 The three are initially spooked by the armed guards posted on the perimeter, but are soon welcomed into the community and allowed access for interviews. Patrick’s sister, Caroline (Upstream Colours’ Amy Seimetz), is the group’s must enthusiastic convert, her bouncy energy putting the men instantly at ease. Their initial is scepticism thus somewhat assuaged by stories of salvation from ghettos, drugs and alienation, whilst Sam prepares for an interview with the charismatic leader of the church, the mysterious ‘Father’ (played with courteous malignancy by Gene Jones). Unfortunately, it appears to be high time for a moratorium on found-footage films. There are, now, simply too many of them being released each year.

In The Sacrament, the use of the found-footage format actually plays against the horror of what’s actually happening within this remote community. West’s lack of enthusiasm for the form also appears evident in the casual way in which he so frequently breaks the rules. Further issues include the film’s incessant soundtrack (courtesy of Tyler Bates) and several camera angles that are simply impossible given the context and the motivation of the characters, holding on to their recording devices even when evading capture – and subsequent murder – from an angry posse of armed men.

The events that inspired The Sacrament are faithfully retold, though West feels obliged to throw in familiar horror clichés such as the creepy mute child and a couple of high-end wet deaths. And yet, this still feels like a missed opportunity. The Jamestown Massacre proved the biggest loss of American life in a non-wartime event (up until 9/11), but there’s still nothing in West’s film as horrifying as what can be found in PBS’s 2006 documentary, Jamestown: The Life and Death of Peoples Temple. If you have the opportunity, make sure you see that before indulging West’s latest.