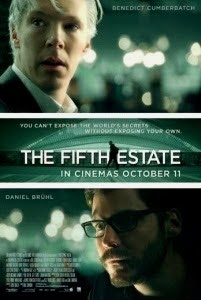 Ripped from newspaper headlines that are still fresh in the memory, Bill Condon’s The Fifth Estate (2013) is a studio-financed, heavily dramatised account of the controversial WikiLeaks site’s publicised quest to expose corruption and deception at the highest strata of political and economic authority. With Wilde’s “Give a man a mask and he’ll tell you the truth” as its mantra and following an ostentatious exposition charting the evolution of news reporting, The Fifth Estate begins with the orchestrated release of classified US military information by The Guardian, The New York Times and weekly German magazine Der Spiegel.

Based on two novels – one by WikiLeaks founder Julian Assange’s former colleague Daniel Domscheit-Berg, the other by The Guardian journalist David Leigh – we’re presented with the torturous working relationship shared between Assange (Benedict Cumberbatch) and Domscheit-Berg (Daniel Brühl). Not dissimilar to David Fincher’s The Social Network (2010), Condon’s film traces these events through a fractured friendship, yet infuriatingly never touches upon the serious nature of the released documents. What remains is a strangely prosaic biopic about an enigmatic figure painted as a neurotic and power-hungry loner. 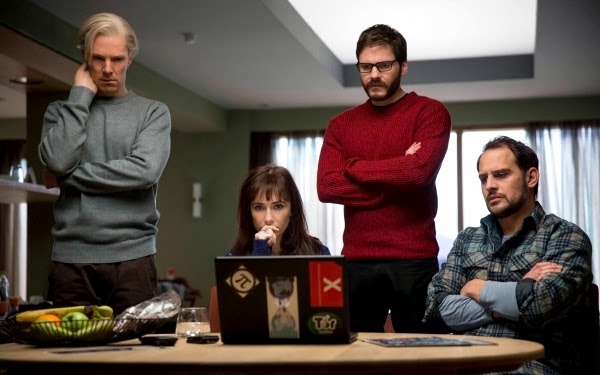 Cumberbatch is by far The Fifth Estate’s trump card, bequeathing us with a convincing impersonation of Assange. Sadly, that’s all it is: an impersonation, a caricature that feels more aligned to a political satire sketch than of a hard hitting drama. His Assange is full of hubris and pantomime villainy, yet lacking in any form of empathy. Despite having already crafted two unconventional biopics, Condon appears content to merely dump all the data he’s collated, blurring his tawdry image of reality with brazen Bourne-style edits that merely distort the lines of fact and fiction. Film should contain a hieroglyphic of the absolute truth, yet in The Fifth Estate we realise that the image cannot be trusted, contorted solely to entertain and titillate.

The debate behind the ideology that defines WikiLeaks remains the most fascinating element of this story. Is WikiLeaks about publishing unrevised censored material, or about protecting the whistleblower? It’s a theme already covered judiciously by Alex Gibney’s probing 2012 documentary We Steal Secrets. However, by putting Assange front and centre and consigning issues such as his on going rape allegations to a literal footnote, Condon has created a dangerously uninformed studio biopic that not only undermines the very act of whistleblowing, but also feels like it has its own cynical agenda.

Perhaps most troubling is the film’s deplorable representation of Bradley Manning (pivotal to the whole WikiLeaks scandal), at one point referred to as “a mentally disturbed 22-year-old with a Lady Gaga CD”. Laura Linney’s CIA agent sums up the film’s chaotic agenda quite succinctly when she states, “I don’t know which one of us history is going to judge more harshly”. Condon’s The Fifth Estate ironically demonstrates just how much mainstream cinema – like news reporting – has become driven by vapid consumerism and lowest common denominators, with the ‘truth’ unfortunately of little intrinsic value.