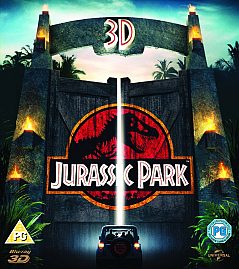 Sixty-five million years in the making, Steven Spielberg’s spectacular 1993 dinosaur romp Jurassic Park returns to Blu-ray this week thanks to a brand new digital restoration, with the addition of 3D. Whilst certainly a lighter, family-friendly adaptation of the late Michael Crichton’s darkly satirical, gene-splicing bestseller, Spielberg’s blockbuster spawned two sequels (with Jurassic World also on they way) and, like E.T.: The Extra-Terrestrial (1982), captured the imagination of an entire generation. For those still yet to see the 13th highest grossest film of all time, here’s a brief synopsis. 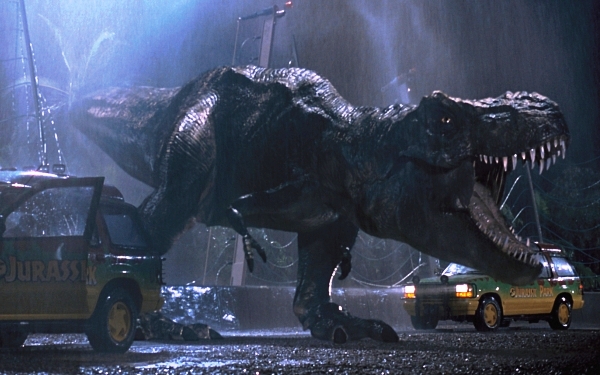 Richard Attenborough plays John Hammond, a jovial billionaire who is also the CEO of InGen, a shady genetic engineering corporation that have managed to clone dinosaurs from DNA found inside fossilised mosquitoes. Hammond’s grand scheme is to create an exclusive amusement park on Isla Nubla, a small island off the coast of Costa Rica, accessible only to the super-wealthy. After an accident on the island, during which one of his workmen is killed, Hammond brings in a crack-team of palaeontologists, math spods and even his own grandchildren to validate the park’s security. However, it isn’t long before the prehistoric creatures break free from their confines and set about personally readdressing the food chain.

Fine performances from a superb ensemble cast ensure that Jurassic Park’s high concept plot is grounded by believable, likeable characters. Attenborough is the perfect fit for Spielberg’s Hammond, dropping some of the cold, Machiavellian traits of Crichton’s original template and imbuing him with an almost cuddly eccentricity. Sam Neil and Laura Derne are both more than suited to playing the ‘will-they, won’t they’ palaeontological double act as Alan Grant and Ellie Saddler respectively. And yet it’s Jeff Goldblum’s turn as enigmatic ‘rock star’ mathematician Ian Malcolm that steals the film, his reaction upon discovering a giant mound of Triceratops dung one of modern cinema’s great throwaway one-liners.

This new Blu-ray 3D rerelease of Spielberg’s original Jurassic Park will hopefully introduce an entirely new generation to one of the 1990s’ very best blockbusters. Unlike his close friend George Lucas, Spielberg has thankfully forgone updating the films special effects and for good reason – the CGI has barely dated, with the dinosaurs still remaining the most lifelike and realistic ever committed to celluloid. Best enjoyed on the biggest television/projector screen you can find, Jurassic Park is a classic of its era, with this rerelease a timely reminder of just how good a visual storyteller Spielberg was and is.