Blind Massage (Tui na, 2014), adapted from Bi Feiyu’s eponymous novel, is Chinese director Lou Ye’s second feature following his State-imposed filmmaking ban. Shot with a mixed cast of professional and non-professional blind actors and boasting a highly developed aptitude for visual storytelling, Ye’s latest is a sensual poem about those leading their lives in the darkness of society. Thrust into a world where everyone dwells in the shadows, Blind Massage sees Ye depart from the sweeping urban romanticism of his previous work by locating his new offering almost entirely within the confines of a Nanjing masseuse parlour. 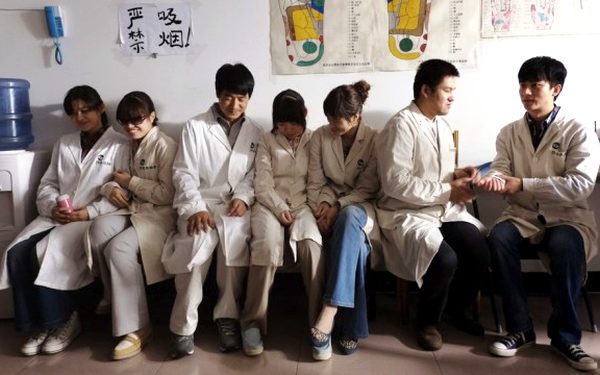 Ye’s camera feels both intrusive and apprehensive throughout, as it observes the daily lives and numerous intimacies of an autonomous community of visually-impaired masseuses. Parlour manager Sha Fuming (Qin Hao) grows incongruously enamoured by tales of his new employee Du Hong’s (Mei Ting) beauty. She holds a torch for her co-worker Xiao Ma (Huang Xuan), whilst Ma sadly harbors his own infatuations for a local prostitute. Each of the parlour’s employees is united by their desire to find someone with whom to share the darkness, with this cohesive clinic microcosm ultimately echoing the prevailing sense of disillusionment with the effects of globalisation outside of modern China’s key cities.

Attempting to enter the oblique and ponderous space of his protagonist’s subconscious, Ye effectively captures a hollow sense of emptiness felt by his characters. This emotive technique is strengthened by Johann Johansson’s evocative electronic soundtrack using synthetic soundscapes to replicate the characters’ sense of visual disorientation whilst the accompanying brooding strings echo their emotional fragility. However, whilst poetic in form, Ye’s stylistic attempts to perceive what a life lived in near total darkness would be like, through the visual medium of film, reveals itself to be a rather futile exercise – confounding the audience with constantly shifting perspectives within an otherwise linear narrative. Feiygu said of his book: “I didn’t make the blind see the world, but I made the world see the blind.”

Whilst it’s clear that Ye is attempting to expand this idea into a metaphor for the cultural shadow China inhabits, the emotionally overwrought representation of his characters’ lives makes the film’s few subtle attempts at social commentary feel incredibly faint-hearted. Already approved for national distribution by the China Film Bureau and part funded by the Chinese government, Blind Massage seemingly lacks Ye’s previous controversial slant. Whilst issues of corruption, gender, and obsession seen in previous work are all present, the film’s questioning of contemporary social malaise and the restrictive nature of the State, although apparent, feels exceedingly benign. Whilst his characters may have lost their sight, it feels like Ye is sadly losing both his vision and his voice.