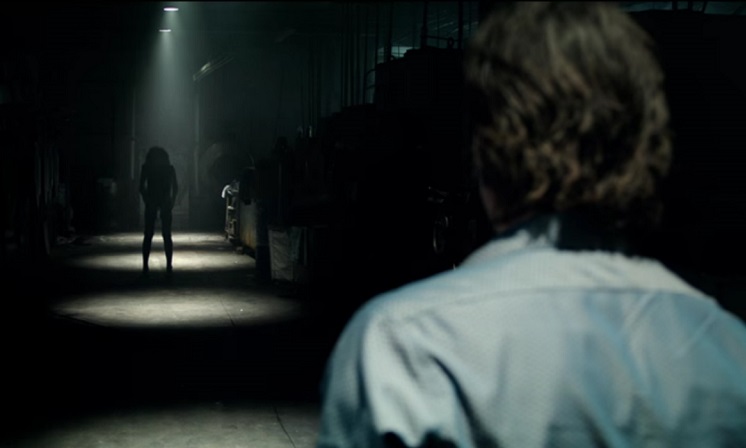 The fear of the dark is a common phobia that stems from a fear of the unknown; those unexplainable bumps in the night and the monsters hiding under the bed. The darkness, and the ghouls lurking within it, have provided the foundations for many a horror film, but rarely has it been employed as literally as in David F. Sandberg’s Lights Out. Based on the director’s award-winning short film about a demon who can only be seen in the dark, this basic conceit has been extended with the help of horror specialists, James Wan and screenwriter, Eric Heisserer; transforming this light-adverse apparition into a terrifying metaphor for how depression can feel like a dark, inescapable place.

The film’s gruesome antagonist is first glimpsed in a dimly lit mannequin warehouse. This cliched, yet no-less-terrifying opening lays out the film’s basic rules when Paul (Billy Burke) leaves the safety of the light and falls victim to the malevolent force dwelling in the shadows. Back home, Paul’s newly widowed wife, Sophie (Maria Bello) has chosen a terrible time to come off her medication. Not only has her husband been brutally murdered, but social services have becoming concerned about her son, Martin (Gabriel Bateman) who keeps falling asleep in class. On top of all this, Sophie’s old friend Diana, has come to stay. Sophie and Diana met in a mental asylum when they were young, and the pair have been inseparable ever since. However, Diana isn’t your usual house guest, she’s Lights Out’s malevolent demon, an emotionally dependant incubus who feeds off Sophie’s depression. When the lights go out, Diana torments Martin by lurking ominously in the darkness of his wardrobe and loudly carving cryptic messages on the floorboards with her razor sharp nails. Gaze into the darkness and he can she her bedraggled face starring right back. If he switches the lights on she disappears; but switch them back on and she suddenly teleports closer to him.

Lights Out is an unashamedly derivative exercise in recycling classic horror tropes. Wheeling out a range of tired clichés, and breaking almost all the horror survival rules of Wes Craven’s Scream. Characters often say things like “I’ll be right back,” before running into clearly signposted dead-ends without a hint of self-awareness, with Sandberg evidently taking great pleasure in leading the audience running and screaming down a familiar trail. The anticipation of every jump scare is met with exceptional execution, and the film’s frantic rhythm consistently denies the opportunity to bemoan the familiarity of this onslaught of frights. This agonisingly tense atmosphere is ratcheted-up further by some judicious editing and an inventive use of lighting, with DoP Marc Spicer utilising every imaginable source of illumination; from black lights to wind-up flashlight, to keep the audience, and Diana, constantly on their toes.

Lights Out is a horror film noticeably conscious of its lineage. In terms of genre pedigree, there’s traces of everything from Wes Craven’s Nightmare on Elm Street to J-horrors like The Grudge and Deep Water. But it’s perhaps with Jennifer Kent’s The Babadook that Lights Out shares the most DNA. As well as a striking resembles between Diana and the eponymous storybook villain of Kent’s psychological horror, Sandberg’s film also attempts to root its horror in mental illness and the unconscious anxieties associated with motherhood. However, while Kent’s film sacrificed scares to create something more authentic, Lights Out lacks the same sensibility and nuanced approach to mental health. For a film so openly concerned with clinical depression, there’s no room for forgiveness when it comes to its misjudged finale. Positing an insensitive solution for overcoming depression, it’s not Diana who’ll continue to trouble audiences when the lights come back on, but the film’s clumsy handling of its subtext.