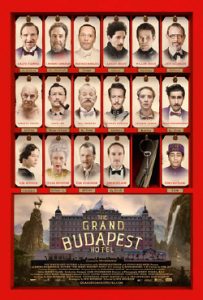 Wes Anderson ushers in the 64th Berlin Film Festival with his latest intricate offering The Grand Budapest Hotel (2014). Starring Ralph Fiennes in the lead as concierge extraordinaire M. Gustave, Anderson marries old world opulence with his signature stylistics in what is a frosted gateau of a dramedy, trimmed with vibrant charm and wry humour. Whilst the film is dusted with a plethora of stars, for the most part the story focuses upon three central characters: the aforementioned Gustave (Fiennes); his protégé Zero (newcomer Tony Revolori); and Agatha (Saoirse Ronan), a talented patisserie chef with whom Zero falls in love.

In a plot that feels like a sugar-fuelled Miss Marple novel, we first meet Gustave earning the affections of liver-spotted old dame Madame D (an aged Tilda Swinton). When she’s found tragically murdered, Gustave flees from the mountain-top Grand Budapest Hotel to her funeral, at which he discovers that he is to inherit her most prized (and most priceless) possession, the exquisite ‘Boy With Apple’ painting. This is much to the chagrin, however, of the late Madame’s son Dmitri (Adrien Brody), as well as his gargoyle of a henchman, Jopling (Willem Dafoe). What ensues is an episodic adventure involving lost wills, prison breakouts, art theft and more than one delicious candy-coloured macaroon from Agatha’s bewitching bakery, Mendl’s. 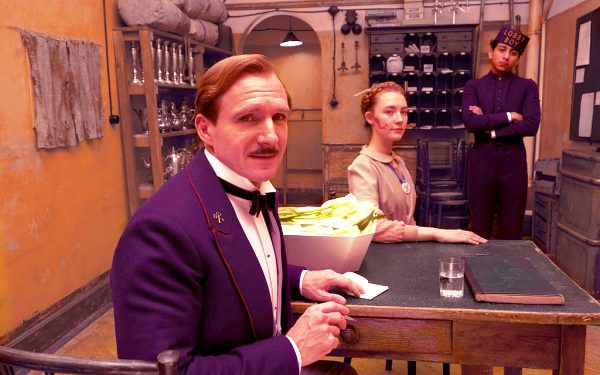 Anderson’s trademark whimsy had grown tiresome of late, no more so than in the eminently forgettable Moonrise Kingdom (2012). With Grand Budapest Hotel, however, the marriage of the decline and fall of old Europe and the American auteur’s signature aesthetic proves not only a perfect fit, but also far more digestible. This is a tattered chocolate box of cinematic delights that, much like Gustave himself, is liberally perfumed with moments of tightly honed humour. The film hangs on Fiennes’ elegantly stagy performance, oscillating from military sternness to gleeful foppishness like a crude Bertie Wooster – only with a particular penchant for sleeping with the grand, old ladies of Europe (as he call them, the “cheap cuts”).

Gustave’s relationship with the doting Zero provides many of the film’s finest scenes – including the penning and recital of romantic poetry whilst Gustave is telling the mustachio’d ruler of the hotel to stop flirting with his betrothed Agatha. When Fiennes is off-screen the comedy does fall a little flat in order to facilitate the multitude of cameos from the vast cast list, with appearances from regular collaborators Bill Murray, Jason Schwartzman and Owen Wilson. To help pull things together, Anderson effortlessly combines a double-framed narrative along with a plot crossing three distinct eras (complete with a trio of different aspect ratios), further emphasising the decline of Europe’s empires and the movement towards the less lavish modern age.

This all makes for a fairytale retelling of the political turmoil rife in Europe over these critical decades, including the rise of fascism – symbolised in Dafoe’s zigzagged uniform that’s more than a little reminiscent of an SS officer’s. Intriguingly, and at times jarringly, there are also moments of eyebrow-raising violence that, whilst not typical of Anderson’s oeuvre, do hint at the years of conflict that was to engulf this period in history. Just to put the icing on the cake, Alexandre Desplat offers up his musical talents once again, with an eclectic score pleasingly reminiscent of 2009’s The Fantastic Mr. Fox. Handsome, opulent and cunningly devised, The Grand Budapest Hotel is Anderson’s homage to a Europe now lost to the annals of time.

The Grand Budapest Hotel featured in CineVue’s ‘Best films of 2014’ feature. You can read the full list here