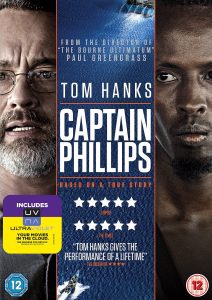 Tom Hanks is an actor who has regularly provided an anchor for his audience; a steadfast and dependable rock regardless of whether the surrounding waters are choppy or still. He is thrust into a scenario most certainly on the rocky side in Paul Greengrass’ nautical thriller Captain Phillips (2013). Based on the true story of a 2009 hijacking off the coast of Somalia, it is something of a return to form for the director after Iraq war drama Green Zone (2010), which was widely considered to have lacked his usually unfailing edge. Here Greengrass’ style is finely judged and complements the pulsating storyline to a tee. 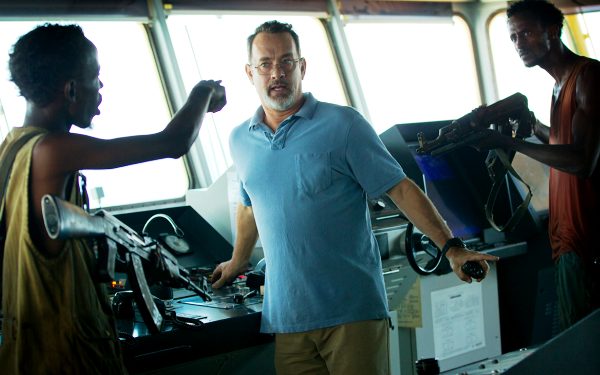 Hanks plays the eponymous sea captain in charge of freighter the Maersk Alabama as it passes Somalia on its way to Mombasa. On the shore, a village readies itself to send out two skiffs looking for a suitable target for their piracy. Though Phillips’ actions repel them once the pirate leader, Muse (Bafta Best Actor winner Barkhad Abdi), is determined and the next day four armed men board the ship. Thus ensues a battle of wits in which the stakes are high and the tension, almost impossibly, is higher. Phillips must try to protect his ship and crew from the fearless Muse. There are parallels to be drawn between Captain Phillips and United 93 (2006), with each featuring a group of Americans taken hostage aboard a vessel.

The similarities extend beyond that, however, with the stripped-back thriller used to explore deeper themes. Both films also take the time to explore, at least somewhat, the context for the actions of the abductors. Here, the village is being shaken down by a gang of local bosses who threaten the inhabitants if they don’t supply enough money. At one point, Muse frames life as a choice between fishing and piracy – in a world where there are no fish left to catch. It helps that the performance of Abdi is exceptional, as this lends a great deal of weight to the ambiguity that Billy Ray’s screenplay seeks to bring to the situation. Equally impressive is Hanks as the fast-thinking and always selfless Phillips, trying desperately to diffuse the situation.

It speaks a lot of Hanks’ ability as an actor that after all of the excruciating suspense, he’s still able to land an emotional punch that knocks the wind out of your sails as the end approaches. Barry Ackroyd’s cinematography – instantly recognisable in its handheld immediacy – perfectly balances style and function, placing the audience right inside the taut situation. It opens with a general sense of unease, but once the skiffs first approach the ship, Greengrass’ Captain Phillips grabs hold of you and doesn’t even consider easing up until the final credits – making its leading duo of well-drawn characters, and the wider connotations, all the more impressive.