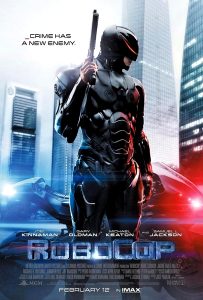 Dead or alive, a 21st century remake of Paul Verhoeven’s 1987 cult science fiction classic RoboCop was always an inevitability. Fortunately, when plans were first announced they also brought with them the welcome news that Brazilian director José Padilha, best-known for the action-packed Elite Squad (2007), would be at the helm. Set in a near future, this reinvention takes a less violent, yet still entertaining 2014 approach to the familiar tale of the tin-cop. We open far away from the streets of Detroit via video-link, where a crazed television host, Pat Novak (Samuel L. Jackson), is preaching of the work of military tech giants OmniCorp. 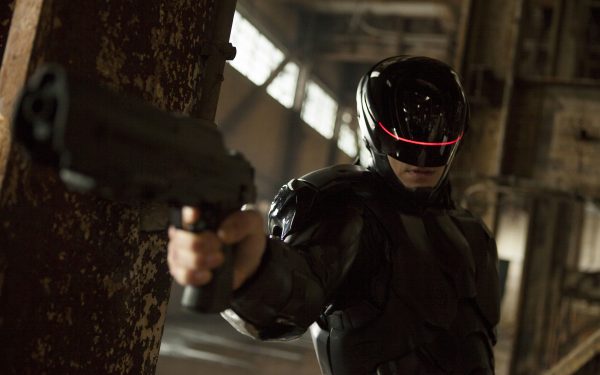 In Afghanistan, we see robotic military patrols scanning citizens, with one routine inspection ending in a tragic incident. Despite the savage outcome, Novak poses a question – “Why is America so robophobic?” – seeking for a change in legislation to allow OmniCorp to police US streets with their wares. Back in Detroit, we find fated cop Alex Murphy (Joel Kinnaman) investigating arms dealer Vallon (Patrick Garrow) with his partner, Jack (Michael K. Williams). After delving into Vallon’s affairs, Murphy is severely injured, presenting OmniCorp CEO Raymond Sellars (Michael Keaton), with the opportunity to create a cyborg bypassing anti-robotics laws with the aid of Dr. Dennett Norton (Gary Oldman, in Frankenstein mode).

Whilst it’s perhaps predictable that comparisons will be drawn to the eighties original of the same name, there is a sense that Padilha has fought hard to create as unique a tale as he possibly can. Sadly, it remains something of a mangled affair, lacking cohesion but delivering on thrills. There’s a woolly exploration of drone warfare as well as the moral implications of how armies and countries can – or, as the case maybe cannot – be held accountable for their actions. This does feel a little like War Studies for Dummies, as do musings on what makes “a man a man”. Elsewhere, noble attempts have been made to present Murphy/RoboCop as a tragic figure, but there’s still a sense of glamour thanks to new ‘tactical’ black armour, looking as if Apple – by way of BAE Systems – had designed it.

More interesting, however, are the peripheral characters. Oldman’s Norton is every bit the tortured scientist; able to do great good, but in order to continue his research he must sell his soul to OmniCorp. Keaton offers up an enjoyably maniacal turn, like a twisted Steve Jobs demanding the impossible from his staff in order to change the very world itself. And though Jackson’s TV celeb-cum-evangelist lacks the convincing satire of Verhoeven’s original commercials, he provides some essential moments of comic humour amidst the effects. Whilst distinctly 12A in tone, some moments – particularly the opening action – set-piece – are extremely visceral, reminiscent of Padilha’s previous works. His custom-built RoboCop reboot is an entertaining sci-fi actioner with admirable delusions of grandeur.