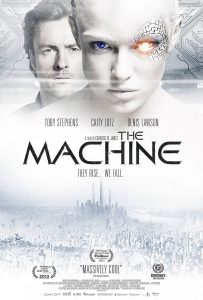 Welsh writer and director Caradog W. James’ The Machine (2013) is a terrifying vision of a dystopian world that may not be too far into the future. Vincent (Toby Stephens) is a government scientist working on various forms of artificial intelligence in order to create the ultimate robot fighter for use in warfare both at home and abroad. However it’s only when his new assistant Eva (Caity Lotz) begins to question the running of the research programme and the role of their boss Thomson (Denis Lawson), that events take an unexpected and devastating turn. The Machine is not the depiction of a pristine iFuture we have come to expect. Here, life is dirty, grimy and vicious. 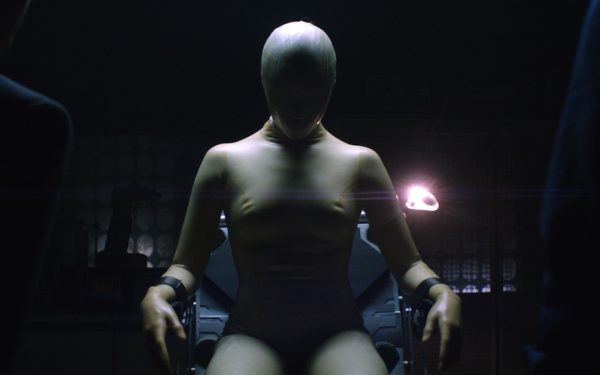 James’ world is one of corrupt, self-serving officials, as well as scientists who believe in good – albeit in their own twisted fashion. Though the film’s premise is, on one level, reasonably simple, focusing as it does on the relationship between Vincent and his humanoid creation, nothing is as it would initially appear. Here, the actions and objectives of the government manufactured robots are as volatile and unpredictable as those of the scientists and officials who create them, resulting in scenarios which are as shocking as they’re unexpected. This is also a film splattered with vivid images of bizarre, surreal beauty – as in the initial birth of the new ‘being’ the government is working on. Neither is it a film for the squeamish.

The Machine is awash with viscera, though not the sanitised type which we’ve come to expect from much modern sci-fi. Here it runs in deep red torrents which seep from wounds inflicted when the viewer least expects it, as in an initial shock sequence which takes place early in the proceedings. Though other characters, such as Lawson’s corrupt Thomson, are wonderfully realised, the film’s real magic comes from the bonding between Vincent and Eva. Lotz and Stephens infuse their characters with a toughness leavened by vulnerability which lends them believability in an often bizarre and cruel new future. The future, as seen in The Machine, may appear harsh – but it might also prove closer to an impending new reality than we realise.