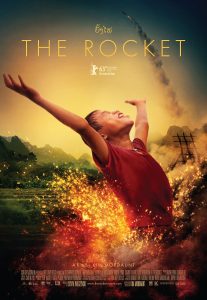 ★★★☆☆
Magical realism helps bring to life one child’s search for a new home in the eminently likeable The Rocket (2013), the latest narrative feature from Australian director Kim Mordaunt. Shot entirely on location in Laos, Mordaunt’s heartwarming tale of redemption displays a solid – if somewhat basic – understanding of the tumultuous recent history of this green yet war-torn land. Constantly reminded of the mass American bombings of the last half a century, whilst also facing a new threat in the form of unscrupulous energy corporations intent on flooding great expanses of rural Laos, The Rocket’s cast of eccentric waifs and strays must band together in order to start afresh in pastures new. 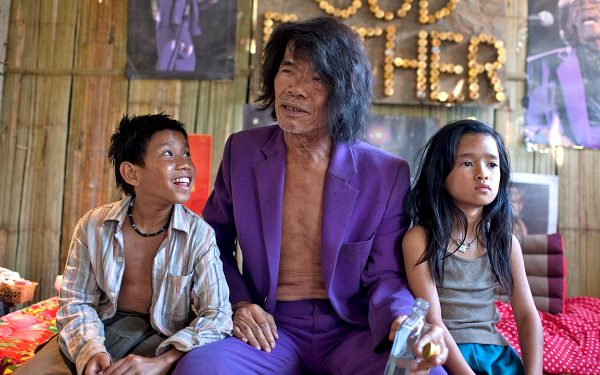 Ten-year-old twin Ahlo (first-time actor Sitthiphon Disamoe) finds himself blamed for a string of awful tragedies that befall his family. After losing his home in a tug of war over land ownership, Ahlo crosses paths with spirited orphan Kia (Loungnam Kaosainam) and her James Brown-loving uncle, Purple (Suthep Po-ngam). With his father Toma (Sumrit Warin) still reeling from the recent death of his wife – for which our hero was of course blamed – Ahlo leads his family, Kia and Purple through a Laos countryside littered with craters and unexploded bombs. Finding temporary solace in a field just outside a developed town, Ahlo sets about building a rocket capable of winning a local competition. Can victory help regain his family’s trust?

Though its central didactic message of retaining hope in the face of adversity is utterly commendable, it’s in the winning lead turns of its two child stars that The Rocket really earns its plaudits. Disamoe and the younger Kaosainam are both excellent, treading that fine line between naturalism and performance with eye-catching ease. Po-ngam is also deserving of a mention as the soulful ex-soldier Purple, drinking away the ghosts of the past with a whiskey bottle in his hand and a Brown ditty in his heart. The same unfortunately can’t be said of Ahlo’s father and grandmother, who fall away disappointingly into the backdrop once the film’s initial equilibrium is shattered. Slight yet heartfelt, Morduant’s The Rocket shoots for the stars – and falls just short of achieving genuine greatness.