DVD Review: ‘All Is Lost’ 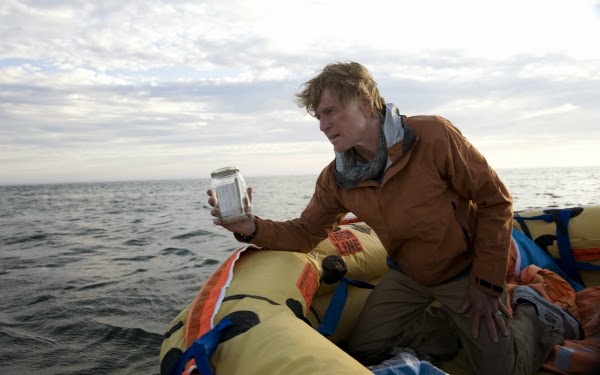 Drifting away from his dialogue-heavy and tightly-wound financial crisis drama debut Margin Call (2011), J.C. Chandor’s sophomore directorial feature All Is Lost (2013) is a stripped down and incredibly gripping story of one man’s struggle for survival after his sailboat is damaged whilst caught adrift 1700 nautical miles from the Sumatra Straits. Casting ageless cinematic nice guy and Sundance Kid Robert Redford as the film’s sole character (labelled ‘Our Man’ in the credits), Chandor fleshes out his initial 31-page treatment and swaps standardised approaches to narrative and characterisation for an intense look at deteriorating mortality and humanity’s unfettered survival instincts.

Opening with Redford’s unnamed character reading, in voice over, a message-cum-apology addressed, presumably, to his unseen family (“I’m sorry…I know that means little at this point, but I am. I tried, I think you would all agree that I tried.”) whilst his chances of survival are beginning to wane, the film then skips back eight days to the initial incident. Deep into a solo voyage across the Indian Ocean, Our Man one day wakes to find water rushing into his 37-foot yacht, the result of a collision with a cargo ship’s mislaid metal container. Though this industrious sailor patches up the breach and drains the hull, his endurance is further put to the test when a storm damages the boat irreparably and he becomes bound to an inflatable lifeboat with limited rations in treacherous, shark-infested waters.

Though a near-total change of pace from Margin Call, aside from Chandor’s penchant for attracting the A-list, All Is Lost successfully carries across and explores further – and arguably on a more innate level – the director’s interest in characters vying with forces out of their control, from the initial stages of the financial crisis of 2007-8 to a fictional story of a man quite literally weathering a storm. Retaining his skill at keeping the camera focused on his characters on an almost uncomfortable scale, Chandor swaps the office space for the expansive emptiness of the Indian Ocean (filled in for by the Baja coast), matched by the verbal desolation of the screenplay, where the sometimes unbearably tense action and Our Man’s internal struggle seems minuscule by comparison. This intensifies Redford’s already exemplary performance which, through simple tics and expressions, uses the power of simplicity to a considerable advantage.

Challenging and negating his carefully sculpted, five decade-long on-screen persona, personified by rugged masculinity, Redford here is a pillar of solitude, completely engaging as an ordinary man clearly tortured by an unknown and nominally alluded to past, with only the opening monologue (which itself is the genesis for the film’s concept) to provide subtle hints. Much of All Is Lost’s strength lies with the empathy it draws from the plight of such a lonely character with a singular desperation to endure, something Chandor’s muscular visual focus simply allows to play out, watching as the mostly contrivance-free plot becomes more transfixing as it slowly arrives at its staggering final moments.

Win a DVD copy of J.C. Chandor’s All Is Lost with our latest competition. Follow this link to enter.