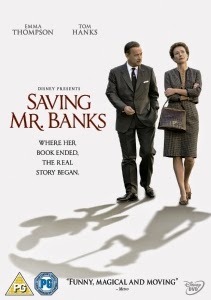 Set in and around the 1964 production of Disney’s classic Mary Poppins, Saving Mr. Banks (2013) stars Emma Thompson as author, P.L. Travers and Tom Hanks as Walt Disney himself. The film depicts the author’s 1961 visit to Los Angeles as she is relentlessly pursued by Disney, in his attempt to obtain the rights to adapt her popular novel. Directed by John Lee Hancock, the film explores the origins of Mary Poppins, adding a new dimension to the world’s most famous flying nanny and her creator. After reluctantly agreeing to meet Walt Disney, prim and proper Travers flies from her London home to Los Angeles to discuss the possibility of a big screen adaptation.

Upon arrival, Travers learns that a team of American screenwriters and musicians are already hard at work sprinkling some of Tinkerbell’s studio magic to her precious source material. Awkward and tempestuous, the author clashes with every alteration or adjustment to her beloved protagonist and takes an immediate dislike to the Disney brand. Walt miraculously starts to bond with Travers and begins to discover the truth behind her book and the reasoning behind her increasingly defiant behaviour. As the author reflects on the past, parallels between her early upbringing with her mother Margaret (fellow Brit Ruth Wilson) and alcoholic father (played by Colin Farrell) begin to emerge with the fictional lives of the Banks family.

Saving Mr. Banks is a sweet, undeniably likable and a wholly inoffensive treat for the entire family. Told in two alternating timeframes depicting Travers as a cantankerous adult and as an innocent, yet somewhat neglected child. As the two narratives run together, or smartly intertwine through song, the reason behind Travers’ caustic personality is exposed. Whether in sixties Los Angeles or Queensland, Australia in 1906, Hancock and DoP John Schwartzman (half-brother of Jason, who also features) create a beautifully warm and authentic aesthetic ensuring that the characters, even in the darkest of circumstances, are shown in the greatest light. The mounting shifts in chronology fade-in through bright skies, to Thompson’s deeply contemplative features as the audience is continually drip-fed snippets of information that successfully create a perpetual level of intrigue.

Travers is expertly played by Thompson, who in the greatest role of her career, brings the character to life with the perfect balance of acerbic and comedic qualities. However, it’s the constant and subtle, pained expression of a woman forever haunted by her past that makes her role so heartfelt and convincing. Although the pair never feature in the same scene, Thompson and Farrell connect seamlessly, each motivating the others’ performance to the finest degree. Hanks is predictably charismatic and engaging as Walt Disney, but then could the film-maker, in a production distributed under his own name, be portrayed in any other way? Although criticised for whitewashing blemishes and fictionalising the relationship between Disney and Travers, Saving Mr. Banks remains a lavish and authentic production that’s both charming and unexpectedly heartfelt.