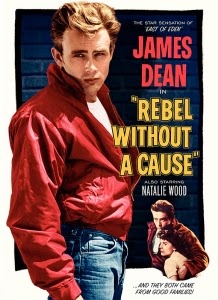 During the infamous “chickie run” race in Rebel Without a Cause (1955), there’s a seemingly unassuming conversation that takes place between Nathalie Wood’s Judy and Sal Mineo’s Plato that neatly sums up five decades of audience fascination with James Dean. Plato – a shy, troubled lad – is exaggerating the extent of his friendship with Dean’s Jim Stark, exposing his own vulnerability as well as Dean’s irresistible allure: “His name is Jim. It’s really James but he likes Jim more. And people he really likes, he lets them call him Jamie.” We are Plato, intoxicated by the feigning familiarity with a dream just beyond our reach. Dean was Hollywood; a man who defined an era, an industry, a zeitgeist.

It’s almost irrelevant that he wasn’t a particularly great actor; he was a youthful paramour that came to define the mass audience’s relationship to cinema. He signified the escape, the romance and, critically, the danger. It’s a stroke of genius on the part of Park Circus to rerelease Dean’s three films as a leading man together. Without the need for any extra-textual detail, the trilogy constitutes the clearest image of Dean as both a man and an immortal icon. Rebel Without a Cause is by far the most famous of the bunch, which is rather curious considering that it’s a relatively schlocky B-picture. But director Nicholas Ray, along with Samuel Fuller (with whom Dean also worked), was the master of intelligent pulp. 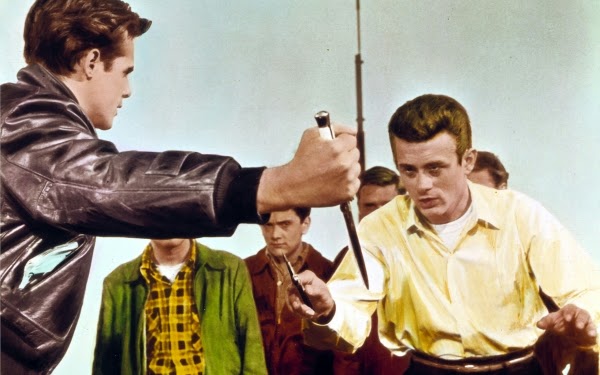 While is falls short of the searing social critique of Ray’s Bigger than Life made a year later, it is notable for capturing the new form of teenage malaise that was prevalent in mid-fifties America with great style and energy. “It’s that awkward age where nothing fits,” says one character and, in Dean, we see the embodiment of that senselessness and futility. Even the film’s weaknesses – a penchant for melodrama and a tendency towards the hysterical – work as remnants of their time and betray an earnest effort to emphasise with the characters and their heightened do-or-die mentality. It’s the least mature of the three films, but it’s the one that lays bare Dean’s ragged appeal. While Ray let Dean loose, however, Elia Kazan got the best out of him by largely containing him, before letting him run riot when the moment was opportune.

John Steinbeck adaptation East of Eden (1955) is a far more serious film than Rebel Without a Cause and easily the strongest of the trio. Everyone knew Dean as a heartthrob, but Kazan recognised the fragility in him; the lost boy adrift in a world that couldn’t understand him. Through Kazan’s lens, Dean’s more mannered contrivances are transformed into the tics of a self-loathing Cain. The biblical references form the backbone of East of Eden’s western vision. It’s dated well and there’s plenty of modern resonance to be found in both the central familial struggle and the anxiety over political reactionaries. Kazan’s imaginative use of composition and blocking, as well as his striking Dutch angles, are leagues ahead of his more staid early work. Kazan was hitting a peak in the mid-fifties, and East of Eden remains one of his best.

Dean’s final film, Giant (1956), is a knowingly ponderous but ambitious affair that self-consciously plugged into the uncertainty of the times, albeit less successfully than director George Stevens’ earlier masterpiece, A Place in the Sun (1951). It’s an anti-Western that – much like Heaven’s Gate twenty- five years later – projects contemporary anxieties against the myths of America. While it may be emblematic of the worst kind of excesses in fifties filmmaking, it nonetheless provides a fitting conclusion to an often undervalued period of cinema and betrays weariness of what was to follow. In that sense, Giant is the perfect elegy for Dean; a celebration of the figure he was and a foreshadowing of his innumerate successors over the subsequent decades.