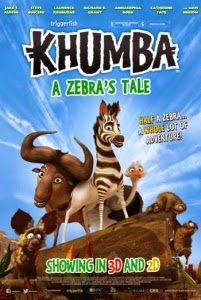 As the recent critical and box office success of both the Oscar-winning Frozen (2013) and The Lego Movie (2014) can attest to, animated movies have seldom been more popular than they are today. Though noble in its intentions, Anthony Silverston’s Khumba (2013) – the sophomore effort from the Cape Town-based Triggerfish Animation Studios – is a substandard digimated excursion that’s all the more dissatisfying when compared to the films that inspired it. When young zebra Khumba (voiced by Jake T. Austin) is born with only half of his usual stripes, his superstitious herd believe it to be a bad omen and he is quickly blamed and branded an outcast when a drought falls upon the dazzle’s land. 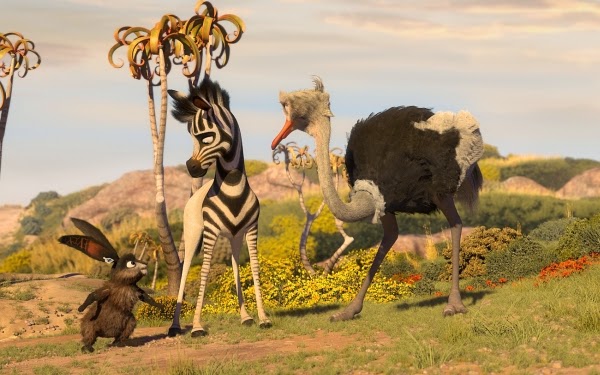 Years later, Khumba’s poorly mother, Nora (Catherine Tate), tells him a story about a ‘magic waterhole’ where zebras supposedly get their stripes. Naively misinterpreting the tale to be real, he sets out on an adventure to find the mystical fountain, joined on his journey by lively wildebeest Mama V (Loretta Devine) and ostrich Bradley (Richard E. Grant). As the eclectic trio continue their search they are hunted by Phango (Liam Neeson), a blind leopard who believes Khumba to be the fulfilment of a prophecy. For all the problems Khumba has, one can’t fault the animation. South Africa’s Great Karoo is nicely rendered throughout, but it’s the narrative that takes place within the world that disappoints. The message of self-acceptance is a favourite of animated cinema, but rarely has it felt so formulaic.

Khumba’s script plays out like an uncomfortable mash-up of Ice Age, The Lion King and Madagascar, whilst the film’s through-line is so contrived as to banish all investment in it. The same can be said of the subplot the film repeatedly flits back to, which sees the herd moving locations in their search for water. It’s not exciting, it’s not particularly funny, and it’s extremely predictable. Elsewhere, the voicework ranges from solid to bland. Neeson is the one who comes away looking the best as the menacing Phango, whilst Laurence Fishburne delivers the vast majority of his dialogue in a boring, monotone voice as Khumba’s characterless father, Seko. Austin’s kid-friendly dialect is well-suited to our hero, while Grant and Buscemi will doubtless amuse younger audiences in fits and spurts. Kids may find some enjoyment in Khumba, but the messages it preaches have been told far better in many an animated film before it.