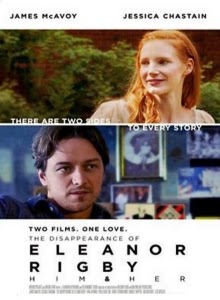 Appearing in the Un Certain Regard sidebar at Cannes in a shortened version of the film previously screened at Toronto, Ned Benson’s The Disappearance of Eleanor Rigby (2014) is now subtitled ‘Them’ rather than the initial two-parter, ‘Him’ and ‘Her’. The ‘Them’ in question are Conor and El (James McAvoy and Jessica Chastain), a couple who are torn apart following the death of their son. We first meet them at a restaurant on a date. They’re a carefree pair, totally in love with each other. They run out without paying the bill and collapse in the park where the fireflies blink in the night (it’s that kind of union). This idyll is broken by the off-screen death of their son, now a blank patch on a wall of photos.

Grief ruins their relationship, with El attempting suicide. Subsequent to splitting with Conor, she moves back to stay under the watchful gaze of her French mother (Isabelle Huppert) and her professor father (William Hurt). Conor struggles on with his failing bar which looks set to close. Business isn’t improved by him flipping out on customers, nor by the ineptness of his ‘kerazy’ best friend and chef (Bill Hader). Both are trying to put their lives back in some kind of order. El takes classes and finds herself under the grudging tutelage of Viola Davis, who initially sees El as the recipient of undeserved nepotism but who warms to El as she gets to know her, giving her a sassy line in tough love which proves mutual. Conor, meanwhile, is advised by his father (Ciarán Hinds), who gleefully laps up some of the film’s best lines.

Perhaps a function of its newly truncated form, this relationship drama feels televisual in its set-up, the echoes between the characters emphasizing further this. Conor’s wacky pal is matched by El’s kooky sister (Jess Weixler), whilst El’s eccentric mom – always with a glass of wine and a cigarette (she’s French) – doubles up with Conor’s father. The death of a child also feels problematic, a narrative aid to make the lives of these relatively privileged hipsters more interesting. The tentative rapprochement is obstructed by second thoughts and contrivances that seem (for all that this is about grief) entirely throwaway. Chastain is as convincing as ever, but the material feels utterly unworthy of her. Alongside, McAvoy – after slumming it in the moral depths of Filth (2013) – returns to his comfort zone of gurning affability. Ultimately, Benson’s Eleanor Rigby disappears into the gap between its rom-com and drama stools, but at least it answers that age-old question: “All the lonely people. Where do they all belong?” Paris, apparently.