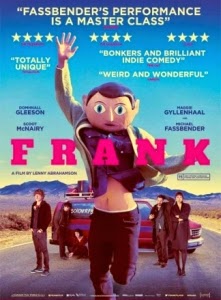 Dublin-born director Lenny Abrahamson teams up with Guardian journalist Jon Ronson for offbeat, oddball comedy Frank (2013), inspired by the life and times of the inimitable Frank Sidebottom and a host of other ‘outsider’ artists. In what could be his first real crossover success, Abrahamson casts demi-Irishman Michael Fassbender as the man in the papier-mâché mask; the enigmatic frontman of a bizarre avant-garde assemble who takes Domhall Gleeson’s wannabe musician under his warped wing following a chance meeting. With Frank, Abrahamson cultivates a mystical hour of prog-based shenanigans before he – and his film – begin to lose their collective heads in a muddled final third.

Gleeson plays Jon, an aspiring singer-songwriter who spends his days trapped in a soul-sapping office and his evenings hunched over his laptop attempting to unearth his musical muse. Our man’s fortunes change, however, when he finds himself face-to-face with hot young things The Soronprfbs, in town for a gig. With their current keyboardist not exactly in the best state of mind, Jon is hastily recruited for the night’s show where he meets Frank (Fassbender) for the first time. A surreal, savant-like figure encased within a giant fake head, Frank sees something special in the shy stand-in, swiftly recruiting him for the recording of The Soronprfbs’ new studio album. Along with Don (Scoot McNairy), Clara (Maggie Gyllenhaal) and the rest of the motley crew, Jon takes a leap of faith into the unknown.

Frank starts off as a wry-eyed, witty satire on the lure of fame (no matter how leftfield), with Jon seduced by Soronprfbs and their bizarre commander-in-chief. Eager to please – despite his obvious creative shortcomings – Ronson’s cipher ingratiates himself with the wild-eyed Don in particular, so it’s a shame when the exceptional McNairy is unceremoniously dumped roughly halfway through. As Jon’s regularly updated YouTube diary of the band’s surreal recording sessions goes viral, Soronprfbs find themselves thrust into the industry limelight after the promise of a showcase slot at the annual SXSW festival. At this juncture, Abrahamson noticeably changes tack, diluting his film into a more formulaic – and less interesting – morality tale about selling out and forgetting your roots, along with the great unmasking of the fragile Frank.

The last half-hour sees our broken, emotionally drained keyboardist unearthing the source of both Frank’s intoxicating ingenuity and mood-killing malaise, with the mercurial Fassbender revealed at last to his expectant audience. Such a grand climax should feel cathartic given the teasing that’s come before, but there’s a sense that both Abrahamson and Ronson have bottled it right at the death, reducing an out-there British dramedy into an ‘issue film’ with a social conscience. It’s a somewhat unwelcome dénouement given the subtlety of Abrahamson’s past endeavours (granted, swansong I Love You All may lift the spirits of most), and perhaps a sign that it’s the filmmakers, rather than Frank and his Soronprfbs brethren, that have compromised their original creative vision in the hunt for mainstream acceptance.