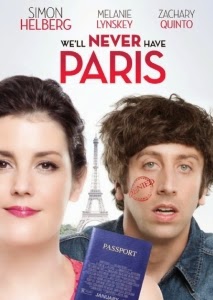 Best known as the one of the lovable nerds around which CBS’s world-dominating The Big Bang Theory revolves, Simon Helberg has now moved behind the camera for his cinematic directorial debut alongside his wife Jocelyn Towne. Inspired by their own romantic history, We’ll Never Have Paris (2014) – which he also wrote – stars Helberg as a man suffering a relationship crisis just as he’s plucked up the courage to pop the big question. Premièring in the UK at the Edinburgh Film Festival, We’ll Never Have Paris wears Woody Allen’s heart firmly on its sleeve, yet never quite scales the heights of the works it so desperately attempts to reference and emulate.

A far cry from the indoorsy Jewish geek with the horn that he plays in his famous television role, here the young helmer casts himself as Quinn – an indoorsy Jewish geek with the horn. Riddled with indecision, he finally bites the bullet and decides to propose to his childhood sweetheart, Devon (Melanie Lynskey), when the long-legged blonde at work, Kelsey (Maggie Grace), confesses her love for him. Quinn’s previously uneventful life is chock full of dilemmas as he must choose between exorcising the pent up promiscuity that he missed out on as a youth, and convincing his soul mate that he is ready to commit. If the lead character sounds familiar, that is because he is. Not so much influenced by Allen as a direct ode to him, neuroses and a bevy of beauties plucked straight from his starry oeuvre.

In addition, the Gallic theme to the soundtrack and an eventual sojourn to the City of Love are designed to evoke the Midnight in Paris director’s style and sphere of influence without ultimately meaning very much. More problematic is that neither Quinn, nor his escalating predicament, provoke the laughter or empathy that the audience are longing for. Indeed, as the end draws near, questions begin to rear their heads about whether Quinn really deserves any of the women that he seems to be continually treating badly. In particular, one can actually sympathise with suave European Guillaume (Ebon Moss-Bachrach) who threatens to steal Devon away from the hapless protagonist once and for all.

That’s not to say that there are not positives, though. The direction from Helberg and Towne is assured for an inexperienced team – stylish as befits their chosen genre. Equally, when the moments of pathos work, they really work and a late piano solo does manage to hit the right notes. Unfortunately, that happens all too rarely in a script that sorely lacks the spark that would ignite We’ll Never Have Paris. Never quite funny, clever or romantic enough to bear such illustrious comparisons as it is shooting for, Helberg and Towne’s debut still suggests a bright future for the duo.