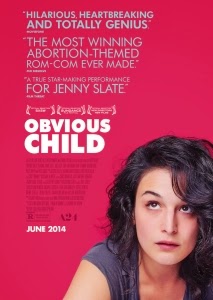 The label of ‘abortion rom-com’ doesn’t necessarily scream box office success. However, director Gillian Robespierre doesn’t care what you think. Her debut feature, Obvious Child (2014), aims to confront life’s uncomfortable truths. From the moment Donna (Jenny Slate) begins her stand-up routine with an anecdote about vaginal discharge, you know you’re in for something different. Stand-up has recently become a podium for women to confront the restraints of a patriarchal society. Donna certainly conforms to the confrontational paradigm of the contemporary female comedian. However, this wry tale of a twentysomething comedian’s unplanned pregnancy thankfully proves anything but conventional.

Donna’s comedy act focuses on the humiliating trauma of adolescence. This includes her sex life, her relationship with her mother and making it as a Jewish female in a predominately male world. Donna’s boyfriend Ryan (Paul Briganti) doesn’t appreciate their dirty laundry being laid out in public and dumps Donna at the end of her set. He also twists the knife by revealing he’s been cheating on her with her friend Kate. So begins Donna’s decline into despair. An all-night drinking session leads her into the bumbling arms of, vapid student Max (Jake Lacy). The pair’s solitary night of awkward fumbling resulting in Donna’s unwanted pregnancy. The question of whether or not she should have an abortion is never an issue. Instead, the question of whether she should tell Max that she’s aborting his child becomes the device that allows Donna to remonstrate over the right to her own body.

A love affair between a woman and her own body, Obvious Child feels like the closest we’ve come in recent years to a rom-com that doesn’t hinge on the validation of an opposite-sex partner for its resolution. By limiting Max’s involvement and making him a faceless presence in a film full of charisma and eccentricity, we have a film that almost manages to readdressing the gender bias of Western cinema whilst at the same time never appearing one sided or militant. Straddling the line between what’s expected of comedy whilst presenting the audience with something fresh and defiant, Robespierre has fashioned an assertion of female worth within the confines of mainstream cinema. This is primarily accomplished through the film’s sharp, acerbic dialogue and some beautifully rendered characters.

The script knowingly plays to the established tropes of the classic coming-of-age narrative, but yields when Donna realises she has to stop trivialising her life via her routine and work toward making herself happy. The introduction of Gabby Hoffman as Nellie, Donna’s stoic and dogmatic friend, allows the film to speak freely about a woman’s right to her own body within a patriarchal society. Nellie anchors Obvious Child in the real world, preventing the overarching didactic from becoming lost amongst the plethora of jokes about vaginas and unsatisfying sexual encounters. Another fine example of Robespierre’s reluctance to circumvent her central message comes in a tremendous scene between Donna and her mother Nancy (Polly Draper). They discuss how abortions weren’t a legal option in the 1960s in a tender moment that succinctly captures the fake sense of progress surrounding 21st century gender equality.

A winning comedy about women openly discussing abortions and talking freely about their bodies shouldn’t feel so unique. It’s a sign of how little progress there has been that it does. Admittedly, some of the film’s technical production feel a little shabby and a few of Donna’s on stage funnies aren’t, well, particularly funny. However, there’s no denying that this is a delightfully candid exploration of reproductive rights and gender inequality. Robespierre’s Obvious Child redefines the contours of the romantic comedy, playing to its strengths and for once speaking for the audience it tries so vigorously to attract, balancing humour, drama and social awareness with aplomb.