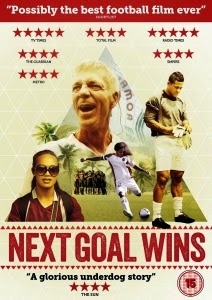 With a title like Next Goal Wins (2014), you’d be forgiven for thinking that British filmmakers Mike Brett and Steve Jamison’s debut documentary is all about the beautiful game – but you’d be wrong. At the centre of the story are the players who belong to the worst football team in the world, American Samoa, who in 2001 lost a staggering 30-0 to Australia. This tremendous defeat has left scars, particularly for the goalkeeper who played that fateful match, Nikki Salapu. Over a decade on, however, the spirit of the team can’t be kept down, as they once again attempt to qualify for the 2014 FIFA World Cup. Their chances are beyond slim, but they receive aid in the form of Dutch coach Thomas Rongen.

Whilst there are the typical highs and lows of any underdog story, found across a plethora of sports docs, Next Goal Wins possesses an atypical amount of heart and charm. Whether the team qualify or not isn’t really the purpose of why this film was made. Instead, Brett and Jamison’s tact is (lofty as it may sound) more philosophical in tone, looking into the lives of the players, the culture they belong to and ultimately why they play football in the first place. The level of sensitivity, as well as the directing duo’s keen eye for observation, is incredibly arresting as they dexterously capture the emotional core of the players. This is most pertinent in the case of the team’s striker, Jaiyah Saelua, who belongs to American Samoa’s third gender, fa’afafine (which translates as ‘way of the woman’ or ‘womanly’).

There seems to be little taboo about being transgender, she is simply one of the team and the community, offering a warming insight to the culture’s openness and level of acceptance. Rongen, who was the only coach to respond to the advert put out by the United States Soccer Federation, is portrayed as the team’s saviour. His passion for the sport is apparent from the off, but more than that, he embraces the ethos of the culture, and translates it into tactics for improving the team. Tragically, Rongen lost his daughter in a car accident. Without being exploitative, it’s covered in the film as a way to show – once again – how the game brings people together. This is a documentary about humanity at its best, and makes a refreshing break from the negative news stories that so often blight the world of football. Tender, charming and made with substantial care, Next Goal Wins celebrates the cliché that it’s not about winning, but the taking part.