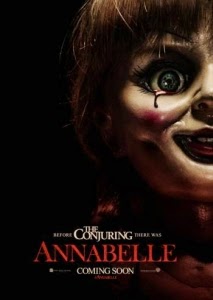 With any film, whether it’s the latest laugh-out-loud comedy, a dark thriller or a haunted house horror, there’s always that slight moment of doubt when you wonder whether the trailer is going to be better than the actual feature. John R. Leonetti’s Annabelle (2014) is one such case – and a disastrous one at that. Trying to build on the promise of The Conjuring (2013), producer James Wan and his team set about turning the horrific-looking Annabelle doll into a worthy spin-off. However, where as the former succeeded in being both an effective entry to the exorcism sub-genre and a frightening one to boot, the latter fails miserably in its attempts to reach the same levels, devoid of anything remotely creepy or unnerving. 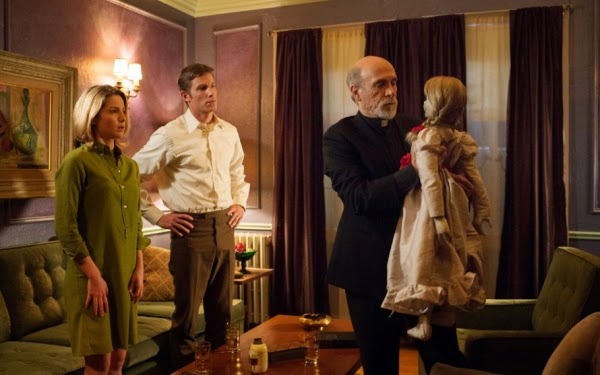 Beginning a few years before the events that brought us into the company of doctors Ed and Lorraine Warren, Annabelle focuses on Mia (Annabelle Wallis) and John (Ward Horton), expectant parents living in California. Startled one night by noises from their neighbour’s house, they are faced with two satanic cult radicals who try to kill Mia. Barely surviving the ordeal, the couple relocates to Pasadena with their newborn, but soon enough Mia is plagued by strange noises in and around their new apartment. All signs begin leading to a mysterious doll that was supposedly thrown out, but which may well have opened up the couple to some supernatural goings on. Leonetti tries desperately to create a sense of tension. Unfortunately, the various tricks used are nothing we haven’t seen a thousand times before in superior offerings.

The screenplay from rookie Gary Dauberman is littered with some horribly corny dialogue, one-dimensional characters and some of the most signposted happenings of recent memory. The cast, led by Wallis (of The Tudors fame), try valiantly to keep the story going, but such is the dismal nature of the film that the majority of them get lost in a swirling vortex of dull frights and supernatural gibberish. Even Alfre Woodard can’t raise the proceedings, despite her ever-reliable charm. At the time of writing, Leonetti’s Annabelle opened at No.2 in the US box office behind David Fincher’s Gone Girl (2014), but despite losing that particular battle the makers of the film will be happy with its haul, with all signs now pointing to a sequel. Outside of these excellent figures, Annabelle is a dire effort from all involved: thoughtless, wholly uninspired and utterly unnecessary. Here’s hoping those involved can get back on form when The Conjuring’s very own sequel comes around.