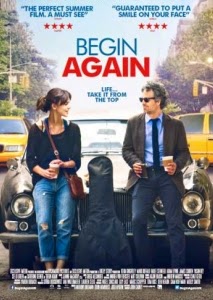 Has modern commercial pop stripped music of its capacity to inspire individuality or can, given the appropriate ingredients, a song tap into the transformative qualities of the art form and truly save your life? Such questions are posed in Begin Again (2013), the latest feature from John Carney, who here transcends his native Ireland – the setting for the award-winning naturalistic modern musical Once (2006) – and embarks on a maiden voyage to New York. Armed with a larger budget and a trove of named stars, Carney goes about capturing an American equivalent of the film he drew much acclaim for as he charts the way music works its magic on the lives and fortunes of two jaded lost souls.

Mark Ruffalo plays Dan Mulligan, a washed up, hip-flask-swigging record executive who has gradually become exhausted by the over-familiarity of contemporary music, a gripe exacerbated by the company he co-founded and its fixation with signing those who Dan sees as “monosyllabic teens with nothing to say”. On the cusp of divorce and alienated from his teenage daughter (played by True Grit star Hailee Steinfeld), Dan is a man lost in time but dedicated in his search for vision over gimmickry, an attribute he literally stumbles upon in a bar one night when he overhears a raw original song by Greta (Keira Knightley), a lonely Brit licking the wounds of a recent breakup and drowned out by an uncaring crowd. “This is a song for anyone who’s ever been lost in the city”, she announces.

A heartbroken untapped talent who goes by the maxim “music is about ears, not eyes”, Greta – now dislodged from the dream life she once envisioned with musician Dave (Maroon 5’s Adam Levine, in his debut acting role) whose eye wondered once he hit the big time – is adrift in an inundating city, crashing on fellow expat Steve’s (James Corden) sofa and trying to figure out her life’s purpose. This search for discovery is bolstered when Dan spontaneously offers to help turn her collection of earnest tunes into a fully-fledged album, yet it isn’t until the pair realise that in order to arrange for her to be heard by the right people, they’ll need to turn to guerrilla-style tactics to lay down her potentially lucrative tracks. This landscape scouring perfectly mirrors Carney’s wide-eyed, deeply sincere approach to telling the essentially unoriginal tale of an unlikely pair being brought together by equal parts inspiration and desperation.

Carney paints New York as a glowing hub of opportunity where tracks can be laid down without interruption and walking around with an iPod can turn the bustling streets into a lyrical pavement of wish fulfilment. It’s this unapologetically cheesy gloss that is at odds with Carney’s clear determination for a semblance of realism; an overwhelming love of music that, however soulful, blunts whatever he’s trying to say about the state of the industry. Perhaps the most perceptive element is Levine’s descent from naïve songwriter to a prototypical, beard-and-all hipster sucked into the lure of the star-making machine, though this is drowned out by a clunky structure that flits back and forth between present and past. At its best, Begin Again celebrates the collaborative power of music, though its alternative message is contradicted by a story that feels so desperately formulaic – despite its toe-tapping soundtrack.