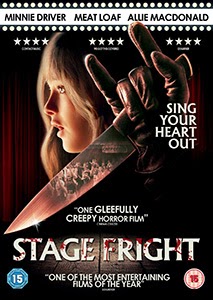 There’s an eerily effective collision of genres happening in Stage Fright (2014). Horror, comedy and musical are all at play and, under the masterful hand of writer and director Jerome Sable, make for deliciously gory fun. While it hearkens back to the canon of 1980s “summer camp slasher” films , there’s a refreshing tongue-in-cheek comedic tone here. Viewers can get the all-knowing wink as well as some guts on the side. Camilla Swanson (Allie MacDonald) is having a rough time: ten years ago, her mother, Broadway diva Kylie Swanson (Minnie Driver), was murdered. This unexpected death leaves Camilla and her brother Buddy (Douglas Smith) in the care of their mother’s manager, Roger McCall (Meat Loaf). 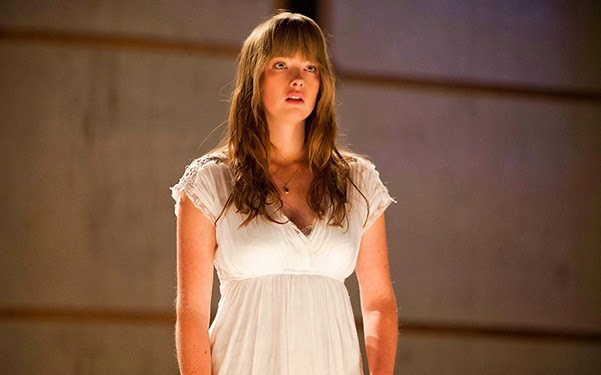 The children end up working as cooks at Roger’s musical theatre-themed summer camp, Centre Stage. Here, there’s no shortage of songs or backstage rivalry. When its announced that the main production of the summer is the same one her mother performed in the night she died, Camilla sees this as an opportunity to not only honour her memory but also to test her own innate musical talents. Alas, a much more grim fate awaits: as production ramps up, so does the activity of a serial killer who loathes musicals. There’s plenty of horror, hormones and haunted history to go around. Omniscient jabs from the diegetic music highlight the silliness of the backstage lives of the theatre and the murders themselves play out in cartoonish fashion, with lashing of fake blood caking horrified victims.

Sable and Eli Batalion’s original music and lyrics are irreverent and witty, playing up to the classically campy nature of musical theatre life, while the numbers themselves add necessary lightness to the shadowy goings-on. The term “camp” is utilised to is fullest, not only as a signifier of location but also of the dominant tone of the film. Riffing on theatre stereotypes of power-hungry directors, sexually ambiguous male leads and the frenzied nature of production, Stage Fright manages to make the performative process a metaphor for psychological and physical horror while never taking itself too seriously. The serio-comic performances also work well in this alchemical brew of horror and comedy. MacDonald shines as dewy ingénue Camilla, playing the genre staple of innocent virgin well. Never letting a gasp go un-gasped or eyes go out of widened terror, watching Camilla as a pawn is enormous fun. The campers are equal parts dramatic, oblivious, baleful and work as a mirror to the serial killer lurking in the shadows. Which begs the question of who is more terrifying: a slew of maniacal theatre geeks or a menacing serial killer? In Stage Fright, they’re one and the same.